US pop icon Madonna said Tuesday she prayed for the freedom of all-girl band Pussy Riot after prosecutors sought three years' prison for its members for performing an anti-Putin "punk prayer" in a church. 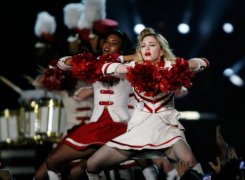 US pop diva Madonna (C) performs during her "MDNA" world tour at the Olympic Stadium in Kiev on August 4. Madonna said Tuesday at her Moscow concert that she prayed for the freedom of the three members of the Pussy Riot protest band who face three years in jail for insulting Vladimir Putin in a church.

The superstar's emotional appeal at a packed Moscow concert came as global concern mounted for the three young women who challenged both the Russian Orthodox Church and the Kremlin just weeks ahead of President Vladimir Putin's thumping March election win.

Top EU diplomat Catherine Ashton on Tuesday noted "irregularities" in the trial and procedures that allowed the band members to remain in pre-trial detention for five months.

Madonna waded into Russia's most heated political controversy after arriving in Moscow just as the three young women prepared to hear their sentence later this week.

Lead singer Nadezhda Tolokonnikova and her mates Yekaterina Samutsevich and Maria Alyokhina pulled on knitted balaclavas and burst into the Christ the Saviour Cathedral on February 21 to ask the Virgin Mary in a song to oust the veteran Russian strongman.

"The three girls -- Masha, Katya, Nadya -- I think they have done something courageous. I think they paid the price and I pray for their freedom," Madonna said to cheers from her Moscow fans.

"They deserve the right to be free. I pray for your freedom," she said, addressing the detained group members.

Madonna paused roughly midway through her highly theatrical performance, which played heavily on religious themes, to say she dreamt of a world where everyone was free to express themselves as they chose.

"I have the right to express my point of view," she said, adding that she prayed for others to obtain the same freedom.

Her performance was preceded by calls from influential Russian Orthodox Church supporters to ban the concert. Local media reports said a small picket was also staged Tuesday outside the star's Moscow hotel.

A spokesman for Russia's Union of Orthodox Banner-Bearers -- a support group for the Church that often wages fierce political campaigns -- accused Madonna of interfering in Russia's internal affairs and putting pressure on the courts.

"This little singer is openly mocking our laws, our traditions and our culture," the spokesman was quoted as saying by the Interfax news agency.

Putin himself had earlier called the performance "nothing good", while adding that he hoped the band members would not be "judged too severely" for their stunt.

State prosecutors however pressed ahead with their charge of hooliganism motivated by religious hatred and demanded that the three defendants serve their sentence in a penal colony where first-time offenders perform corrective labour.

"This crime is severe and the prosecution considers that their correction is only possible in conditions of isolation from society and the punishment needed must be a real deprivation of freedom," said prosecutor Alexander Nikiforov.

The three defendants exchanged a few words after the prosecution asked for the jail term but expressed no outward signs of emotion.

Their growing ranks of supporters meanwhile brandished placards outside the court building reading "Dirty tricks do not become the court."

Defence lawyer Mark Feygin warned the authorities that a jail term for the punk rockers could backfire for Putin and his team.

"This could break relations between society and the state for good," the defence lawyer said.

The protest group is being tried in the same Moscow district court where the jailed Yukos oil company boss Mikhail Khodorkovsky underwent a second hearing in 2010 that almost doubled his time in jail on the eve of his scheduled release.

Khodorkovsky -- the country's most famous political prisoner to date -- said the proceedings reminded him a lot of the atmosphere that led to his own initial arrest in 2004 in the days when he stood in open opposition to Putin.

"The word 'trial' is applicable here only in the sense in which it was used by the Inquisitors of the Middle Ages," he said in a statement from his jail in the northern region of Karelia.

'Swift chariots of democracy': all aboard Washington's secret subway

Gere belongs in cinema, not as migrant witness: ex-Italian minister