Women make mark on the Olympics like never before
World

Women make mark on the Olympics like never before

Women made their mark on the Olympics like never before in London, the first Games ever to feature women in all 204 national teams and all 26 sports. 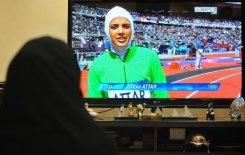 Saudi Arabia's Wojdan Shaherkani (L) during her women's +78kg judo match against Puerto Rico's Melissa Mojica at the London Olympics on August 3. Shaherkani admitted she felt overwhelmed by the attention focused on her as the first Saudi woman to compete in the Games.

The participation of the first women athletes from the conservative Islamic nations of Saudi Arabia, Brunei and Qatar was widely seen as a breakthrough for the Olympic movement, while nations that have long nurtured women's sports reaped a golden reward.

Judoka Wojdan Shaherkani, who took the mat after a flap over whether she would be able to compete in a hijab, admitted she felt overwhelmed by the attention focused on her as the first Saudi woman to compete in the Games.

She was out of her depth, losing in just 82 seconds, but said the whole experience had her looking ahead to Rio in 2016.

"I think that because of my participation in this Olympic Games, other Saudi women will participate in other competitions in the future," she said.

Sarah Attar, too, was never going to be a contender, but after limping home a distant last in her 800m heat the US-born runner called it the "hugest honor to be here to represent the women of Saudi Arabia".

"It is a historic moment. I hope it will make a difference," she said.

It remains to be seen if the participation of competitors like Shaherkani and Attar will have a lasting impact within Saudi Arabia.

But the International Olympic Committee's avowed commitment to gender equality took an unequivocal step forward as women's events were added in boxing for the first time.

"I think the women's performances were magnificent," Wu Ching-Kuo, head of amateur boxing's global governing body said in urging the expansion of the women's tournament beyond the three categories contested in London.

"We have to have more, and we have four years to achieve that."

Three of the five biggest delegations, the United States, China and Russia, brought more women athletes than men, and the women came through in a big way.

US women won 29 of America's medals-table-leading 46 golds, while female competitors accounted for 20 of China's 38.

US Olympic Committee chief executive Scott Blackmun traced the success of US women directly back to legislation in the early 1970s that prevented publicly funded schools and universities from discriminating on the basis of gender -- thus making sports more available to girls and women.

"Title IX (legislation) really gave the US a head start in having a national commitment to make sure that young women are getting an opportunity to be involved in sport," Blackmun said.

"The rest of the world is clearly doing the same thing, so we are glad we got ahead of the curve."

For the women Olympians, just as for men, the Games are all about challenge and achievement, and they have little time for those who still tend to focus more on their looks than their skills.

"I think that our society puts a lot onto women, how they look and what they wear or how they dress, and I think that being a strong female competitor is the best thing we can do to fight that," said US judoka Kayla Harrison.

Harrison defeated Briton Gemma Gibbons for her judo gold, both finalists having found an empowering outlet in sport after turmoil in their personal lives.

Gibbons, 25, lost her mother to leukemia in 2004 while 22-year-old Harrison was the victim of sexual assault as a teenager.

"To be able to say I'm a strong, confident young woman and I'm an Olympic champion feels great," Harrison said. "I hope we have a million little girls inspired by that."

SHANGHAI: Floods across central and eastern China have left more than 140 people dead or missing and are swelling major rivers and lakes to record-high levels, with authorities warning that the worst was yet to come.

The government plans 100 billion baht of new soft loans to help small-and medium-sized enterprises (SMEs) in the tourist and services sector hit by the coronavirus pandemic, the finance minister said on Monday.

KANCHANABURI: A young doctor died when his car crashed into the rear of a truck loaded with bamboo on Sunday night.