Addiction to heroin can be blocked: research
World

Addiction to heroin can be blocked: research

Addiction to morphine and heroin can be blocked, according to research released on Wednesday which could prove a major breakthrough in treating addicts and in pain relief treatments. 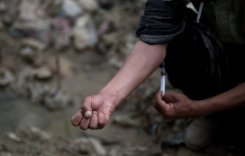 This file photo shows a drug addict injecting himself with heroin. Addiction to morphine and heroin can be blocked, according to research released on Wednesday which could prove a major breakthrough in treating addicts and in pain relief treatments.

"Our studies have shown conclusively that we can block addiction via the immune system of the brain, without targeting the brain's wiring," said Mark Hutchinson from Adelaide's School of Medical Sciences.

"Both the central nervous system and the immune system play important roles in creating addiction, but our studies have shown we only need to block the immune response in the brain to prevent cravings for opioid drugs."

The results, to be published Thursday in the Journal of Neuroscience, reveal that laboratory studies showed that the drug known as plus-naloxone, which is not yet in clinical use, will selectively block the immune-addiction response.

The researchers said that opioid drugs such as morphine and heroin bind to immune receptors in the brain known as TLR4 which then act as amplifiers for addiction, ramping up the "reward" effect of drugs of abuse to a high degree.

The new drug automatically shuts this effect down, Hutchinson said.

"It really reduces the reward level down to the equivalent of food, sex, and hugs," he told AFP.

Professor Linda Watkins, from the Center for Neuroscience at the University of Colorado, said the work fundamentally changed understanding about opioids, reward and addiction.

"We've suspected for some years that TLR4 may be the key to blocking opioid addiction, but now we have the proof," she said in a statement.

The researchers believe the discovery could prove useful if plus-naloxone could become a co-formulated drug with morphine, to allow patients who need pain relief to take the drug without fear of addiction.

But it could have a second application.

"It can be used by itself potentially in addicted people to help their addiction," Hutchinson said.

The research team says clinical trials could be underway within 18 months.