Kenyan police said they were bringing two rival communities together for a peace meeting Thursday, after at least 52 mainly women and children were hacked or burnt to death in the worst ethnic massacre for several years. 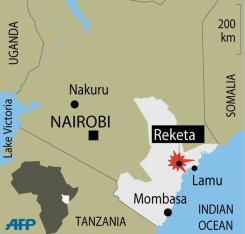 Map locating the Reketa area of Tarassa where at least 52 people were hacked or burnt to death. Kenyan police say they are bringing two rival communities together for a peace meeting following what was the worst ethnic massacre for several years.

"We want to bring together these warring communities," said regional deputy police chief Joseph Kitur, after the attack late Tuesday between the Pokomo and Orma peoples in the rural Tana River district.

The dead included at least 31 women and 11 children, the majority killed with machetes, the others burnt alive as men from the Pokomo community torched their huts.

It was not clear what sparked the attack, but the two communities have clashed before over the use of land and water resources, although the scale and intensity of the killings shocked police.

It was the worst single attack since deadly post-election violence four years ago.

"We are holding a major security meeting on the ground today, because we want to understand what the problem is," Kitur added. "We want to engage them so that we can work together in getting a lasting solution."

The Pokomo are a largely settled farming people, planting crops along the Tana River, while the Orma are mainly cattle-herding pastoralists.

Police were hunting down suspects from the Pokomo group blamed for the attack, but many had escaped into the remote bush.

"Most suspects have fled from their homes after committing the attacks, but we are closing in on them," Kitur said.

The attack happened in the Reketa area of Tarassa in Kenya's south-east, close to the coast and some 300 kilometres (185 miles) from the capital Nairobi.

The bodies were buried late Wednesday in line with Islamic custom, Kitur said, adding that around 50 people are still in hospital.

In 2001, at least 130 people were killed in a string of clashes in the same district and between the same two communities over access to land and a river.

"They need to live together as neighbours instead of resorting to killing one another and even burning houses because of water and pasture," Kitur added.

Lawmaker Danson Mungatana, who represents the area, said on Wednesday the killings were "revenge attacks", adding there had been a string of tit-for-tat killings, attacks and cattle raids this month, though on a far smaller scale.

"There have been problems simmering for a while," he said, shortly after the attack.

In 2007 Kenya spiralled into violence after contested elections that pitted candidates from different ethnic groups against each other, resulting in the deaths of some 1,200 people and displacing 600,000.