Over a hundred students were arrested in Santiago in clashes between police and demonstrators demanding better public education, after the occupation of several schools. 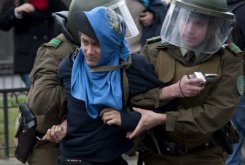 Over a hundred students were arrested in Santiago in clashes between police and demonstrators demanding better public education, after the occupation of several schools.

Some 4,500 students, mostly from high schools and universities, took to the streets to demand improvements in Chile's public education system, said to be among the most expensive and unequal in the world.

Santiago authorities said 113 people were arrested in various parts of the city, including 39 adults and 74 minors.

Police used water jets and tear gas against protesters, who paralyzed traffic in the Chilean capital for roughly two hours.

One week ago, police arrested 139 people when they stormed three Santiago high schools that had been taken over by students demanding educational reforms.

Public education in Chile suffered from sharp cuts in funding during the 1973-1990 dictatorship of Augusto Pinochet, leaving a system that favors expensive private schools that are out of the reach of the poor.

Student organizers have called for another protest on Tuesday.

Boris Johnson: Putin threatened to lob missile at me