Tributes pour in for 'man on the moon' Armstrong
World

Tributes pour in for 'man on the moon' Armstrong

Tributes poured in following the death of Neil Armstrong, the humble US astronaut whose "small step" on the moon captivated the world and came to embody the wonder of space exploration. 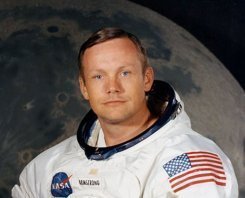 NASA portrait taken in July 1969 of US astronaut Neil Armstrong. Tributes have poured in following the death of Armstrong, the humble US astronaut whose "small step" on the moon captivated the world and came to embody the wonder of space exploration.

Armstrong, who died Saturday at the age of 82 from complications following heart surgery earlier this month, inspired generations to reach for the stars and etched his name next to one of the great milestones of human discovery.

The grainy black-and-white broadcast of Armstrong's moon walk on July 20, 1969 was seen by half a billion people, his words capturing the promise of the still-young space age and briefly uniting a planet split by the Cold War.

"That's one small step for man, one giant leap for mankind," the earthbound heard Armstrong say, though he later claimed that an "a" before the word "man" had been lost in transmission.

"What Armstrong did in putting his feet on the moon was a great success," Gorbatko told NTV television.

"After the flight of Yuri Gagarin -- the first man to go to space -- Armstrong took a new step in space conquest, a big step ahead," said Gorbatko, who was on two flights to space in 1977 and 1980 during the Cold War.

Armstrong's family praised him as a "reluctant American hero," saying they hoped his legacy would encourage young people "to be willing to explore and push the limits and to selflessly serve a cause greater than themselves."

The lunar pioneer was decorated by 17 countries and received a slew of US honors, but was never comfortable with his worldwide fame and shied away from the limelight.

In a rare television interview in 2005, Armstrong said he did not deserve the attention he received for being the first man on the moon, just steps ahead of fellow Apollo 11 astronaut Edwin "Buzz" Aldrin.

"I wasn't chosen to be first. I was just chosen to command that flight. Circumstance put me in that particular role," he said.

Armstrong even stopped signing memorabilia after learning his autographs were being sold at exorbitant prices.

Praise poured in from world leaders and fellow astronauts, with French Prime Minister Jean-Marc Ayrault saying that Armstrong's "small step" had "realized the dream of generations of inventors, scientists, artists, poets or simply amateurs, of the beauties of space."

After the American astronaut he walked on the moon, "Neil Armstrong belonged to humanity," the director general of the European Space Agency Jean-Jacques Dordain said in a statement in Paris.

European Commission president Jose Manuel Barroso said he "vividly" remembered the night Armstrong and Aldrin landed on the moon's Sea of Tranquility, saying Armstrong had "left an eternal footprint on our memories."

Richard Branson, the British tycoon who is launching a space tourism program, hailed Armstrong as "an extraordinary individual."

Born in Wapakoneta, Ohio, on August 5, 1930, Armstrong had an early fascination with aircraft and worked at a nearby airport when he was a teenager. He received his pilot's license on his 16th birthday.

A US Navy aviator, he flew 78 missions in the Korean War.

As a research pilot at NASA's Flight Research Center in Edwards, California, he flew on many pioneering high-speed aircraft, eventually flying over 200 different models, including helicopters, gliders, jets and rockets.

He reached astronaut status in 1962, and was assigned as command pilot for the Gemini 8 mission, during which he performed the first successful docking of two vehicles in space.

After retiring from NASA in 1971, Armstrong taught aerospace engineering at the University of Cincinnati for nearly a decade and served on the boards of several companies, including Lear Jet, United Airlines and Marathon Oil.