Iran on Thursday lifted the curtain on a summit of non-aligned states it presented as a diplomatic triumph, but the event was held under the cloud of intensified UN scrutiny of the Islamic republic's nuclear programme. 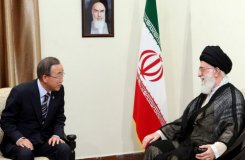 Picture released by the website of Iran's Supreme Leader Ayatollah Ali Khamenei shows Khamenei (R) meeting with UN Secretary General Ban Ki-Moon at his office in Tehran, August 29. A two-day Non-Aligned Movement summit opened in Tehran on Thursday, gathering the heads of state or government and senior officials from 120 nations in an event Iran hailed as proof it was not internationally isolated.

Meanwhile, the International Atomic Energy Agency has unveiled the creation of a special Iran "task force" to scrutinise Tehran's nuclear programme and its compliance with UN resolutions -- including those demanding a suspension of uranium enrichment.

Additionally, the latest IAEA report on Iran's nuclear progress was expected to be released within days -- possibly even in the middle of the Tehran summit, according to some sources at the IAEA headquarters in Vienna.

The report is said to highlight expanded enrichment in Iran and suspicions concerning an off-limits military base in Parchin, outside Tehran, where warhead design experiments might have taken place.

Iran, which insists its nuclear programme is exclusively peaceful, was focused on presenting the summit of the 120-member Non-Aligned Movement in Tehran as proof that Western attempts to isolate it had been in vain.

"We have gathered here today to inject a new life and stimulus into the Non-Aligned Movement," he said.

He was to be followed by Egyptian President Mohamed Morsi who was making a landmark visit to Iran -- the first by an Egyptian leader since diplomatic ties were broken off in the wake of Iran's 1979 Islamic revolution -- to hand over the rotating NAM presidency to the Islamic republic.

A total of 29 heads of state or government attended the opening, including those of Afghanistan, India, Iraq, Lebanon, Pakistan, the Palestinian Authority, Sudan, Qatar and Zimbabwe. North Korea was represented by its ceremonial head of state, parliamentary president Kim Yong-Nam, rather than the country's leader Kim Jong-Un.

The other three quarters of the NAM members were represented by senior officials: vice presidents, deputy prime ministers, foreign ministers and envoys.

The two-day forum, bringing together much of the developing world, was expected to renew its efforts to dilute the power of the UN Security Council's permanent members and uphold calls for a Palestinian state.

It was also likely to slam Western sanctions imposed on Iran and a handful of other NAM states -- Cuba, North Korea, Syria and Zimbabwe -- and underline the right of all countries to supervised, peaceful nuclear energy, according to draft documents.

In his pre-summit meeting with Khamenei, the UN leader called for "concrete steps to address the concerns of the International Atomic Energy Agency and to prove to the world that its nuclear programme is for peaceful purposes," according to his spokesman.

Khamenei, according to his official website, shot back by telling Ban that the "defective" United Nations was in thrall to the United States, and accusing the UN nuclear watchdog of "sabotaging" Iran's nuclear progress.

The two also discussed the role Iran could play in quelling the violence raging in Syria, whose regime it staunchly supports.

Tehran accuses the United States, Turkey, Saudi Arabia and Qatar of sustaining the armed revolt in Syria. In return, the United States and the Syrian opposition claim Iran is sending arms and troops to Syria.