Clinton: Room in Pacific for all
World

Clinton: Room in Pacific for all

US Secretary of State Hillary Clinton said that the South Pacific was big enough for both the United States and China but urged the Asian power to distribute its growing aid fairly. 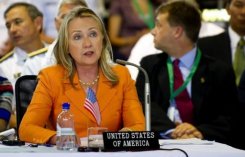 Hillary Clinton, speaking in Rarotonga, says US is in the South Pacific "for the long haul".

Clinton vowed that the United States would remain committed to the South Pacific "for the long haul" and offered new aid as she became the first US secretary of state to take part in an annual summit in the vast but sparsely populated region.

Her visit comes as several island states forge closer ties with China, which according to Australia's Lowy Institute has pledged more than $600 million in low-interest and mostly strings-free loans to the South Pacific since 2005.

Clinton, who will visit Beijing next week for talks on the often fractious relationship between the world's two largest economies, played down rivalries in the South Pacific during the summit in the tiny Cook Islands.

"We think it is important for the Pacific island nations to have good relationships with as many partners as possible and that includes China and the United States," Clinton told reporters.

Amid criticism that China's open wallet has undermined international pressure for democracy in Fiji and other nations, Clinton said: "Here in the Pacific, we want to see China act in a fair and transparent way".

Clinton, in an address to the 15-nation Pacific Islands Forum, said that all nations had "important contributions and stakes" in the security and prosperity of the region.

"I think, after all, the Pacific is big enough for all of us," she said, in a line she used repeatedly during her visit.

Chinese state media have accused Clinton of seeking to "contain" the rise of the Asian nation through her latest tour of the region.

But Vice Foreign Minister Cui Tiankai sounded a conciliatory note during the Pacific Islands Forum, saying Thursday that China was "in this region not to seek any particular influence, still less dominance.

"We're here to be a good partner for the island countries, we're not here to compete with anyone," he told reporters.

Cui said that China was willing to work with other countries but added: "It will not mean that China will have to change its foreign aid policy. We are not changing it."

Any potential US attempt to contest China's role would be fraught with difficulties as several nations in the region have embraced China, with Samoa's leader saying in June that the Asian power was a greater friend than Washington.

Prime Minister Henry Puna of the Cook Islands welcomed the renewed US interest but made clear the region would not distance itself from China.

"We have a very close relationship with the People's Republic of China and I make no bones about it," he told reporters.

"They've been very good to us," Puna said. "There is certainly room for both in the Pacific."

Clinton said she spoke at length with New Zealand's Prime Minister John Key, who encouraged her trip to the summit, about the role of China.

Clinton said that the United States would welcome greater coordination with China on aid as well in protecting water resources and disaster relief.

Some $3.5 million of the new aid will assist efforts to find and remove unexploded ordnance from World War II, which remains a major nuisance decades later.

"We are increasing our investments," she said. "And we will be here with you for the long haul."

The United States ended its main aid programmes in the South Pacific in 1994, resuming assistance only recently as President Barack Obama pledges a new focus on shaping the future of a fast-growing but often turbulent Asia.

Clinton also held talks on cooperation with historic US allies in the Pacific, agreeing with Australia, France and New Zealand to step up surveillance of ships for illegal fishing and pledging to cooperate with Japan on initiatives such as tsunami warnings.