Egypt protesters tear down US embassy flag on 9/11
World

Egypt protesters tear down US embassy flag on 9/11

Thousands of Egyptian demonstrators tore down the Stars and Stripes at the US embassy in Cairo on Tuesday and replaced it with an Islamic flag on the annniversary of the September 11, 2001 attacks in the United States, an AFP photographer reported. 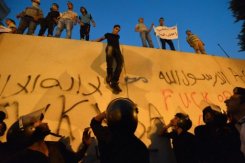 Egyptian riot police stand guard as protesters climb down from the wall of the US embassy in Cairo. Thousands of Egyptian demonstrators tore down the Stars and Stripes at the US embassy in Cairo on Tuesday and replaced it with an Islamic flag on the anniversary of the September 11, 2001 attacks in the United States, an AFP photographer reported.

Nearly 3,000 demonstrators, most of them hardline Islamist supporters of the Salafist movement, gathered at the embassy in protest over a film deemed offensive to the Prophet Mohammed which was produced by expatriate members of Egypt's Christian minority resident in the United States.

A dozen men scaled the embassy walls and one of them tore down the US flag, replacing it with a black one inscribed with the Muslim profession of faith: "There is no God but God and Mohammed is the prophet of God."

Demonstrators also daubed part of that slogan -- "There is no God but God" -- on the walls of the embassy compound.

Asked whether the flag the protesters hoisted on the anniversary of the killing of nearly 3,000 people in Washington, New York and Pennsylvania was that of the Al-Qaeda movement culprits, a US State Department official said she thought not.

"We had some people breach the wall, take the flag down and replace it. What I heard was that it was replaced with a plain black flag. But I maybe not be correct in that," she said, when asked whether it was the emblem of the jihadists that had been raised.

Egyptian police intervened without resort to force and persuaded the trespassers to come down. The crowd then largely dispersed leaving just a few hundred protesters outside the US mission, another AFP correspondent reported.

Women wearing the niqab, the full-face veil worn by hardline Islamists, joined the rally chanting: "Sons of the Cross, anything but our beloved Mohammed."

Egyptian activist Wael Ghoneim wrote on his Facebook page that "attacking the US embassy on September 11 and raising flags linked to Al-Qaeda will not be understood by the American public as a protest over the film about the prophet.

"Instead, it will be received as a celebration of the crime that took place on September 11," he said.

Americans on Tuesday marked the 11th anniversary of the September 11 attacks in which nearly 3,000 people were killed when hijacked airliners slammed into the Pentagon and New York's World Trade Centre and another was brought down in Pennsylvania.

The US embassy in Cairo issued a statement condemning "the continuing efforts by misguided individuals to hurt the religious feelings of Muslims, as we condemn efforts to offend believers of all religions."

On Sunday, Egptian Grand Mufti Ali Gomaa denounced "the actions undertaken by some extremist Copts who made a film offensive to the prophet."

He said that the offence "affects millions of Muslims around the world" and that the making of such a film could not be justified on the basis of freedom of expression.

"The attack on religious sanctities does not fall under this freedom," said Gomaa.

Arab League deputy secretary general, Ahmed Ben Helli, also condemned the film saying it "contained insults against the prophet Mohammed" and "was denounced by Christians and Muslims" across the Arab world.

Ben Helli said that "respecting sanctities and religious symbols is a basic principle acknowledged by the United Nations."

But the Egyptian government stressed that every step would be taken to ensure the security of diplomatic missions.

The foreign ministry said it would take "all necessary security measures to protect all embassies, diplomatic missions and their staff."