New York fashion week hit the road with colorful travel-themed looks from Tory Burch and J.Crew for the free-spirited woman on a quest for adventure. 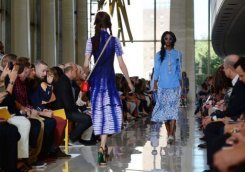 Models walk the runway wearing creations by designer Tory Burch on September 11 during New York fashion week. "The idea was sort of this American prep remix combined with a kind of stylish magpie traveler ... a girl who has classics in her silhouette, then travels and picks things up along the way," Burch told AFP.

California sister act Rodarte meanwhile sent out an army of medieval cyber punks in corseted silhouettes, while Marc Jacobs took a softer tack for his youthful diffusion line after his edgy own-label show the night before.

Burch made the most of the natural lighting Tuesday on the mezzanine level of Avery Fisher Hall at Lincoln Center -- home of the New York Philharmonic -- for a spring-summer collection with a bohemian vibe.

"The idea was sort of this American prep remix combined with a kind of stylish magpie traveler ... a girl who has classics in her silhouette, then travels and picks things up along the way," Burch told AFP backstage.

But those soon gave way to brighter colors and plaids, with indigo blue tie-dyed fabrics -- made by women artisans from the Kindla region of Guinea with help from Burch's own charitable foundation -- coming off as most impressive.

Burch, whose boho chic featured prominently in the television series "Gossip Girl" set in navel-gazing Manhattan, proudly sources her fabrics from places as diverse as China, Italy, Japan, Morocco and Turkey, as well as West Africa.

"It's multicultural," she said, explaining the direction in which her design vision is going.

In an hour-long presentation on the other side of Lincoln Center, trend-setting label J.Crew embraced a rainbow of candy colors for a fresh range of youthful looks for men and women, many shown with models in geeky glasses.

Tom Mora, its chief women's wear designer, said he was inspired by Time-Life photography books from the 1960s and 1970s -- back in the pre-Hipstamatic days of Kodachrome film -- that he discovered one day at his parents' house.

"I imagined this very chic woman, traveling to all these places that you saw in these books, a lot of beach places, a lot of places with water... There's a very happy, very optimistic feel to it," Mora told AFP.

Rodarte's Kate and Laura Mulleavy veered away from the breezy feminine lines they showed in New York a year ago in favor of a darker post-goth look -- fitting, perhaps, in this year of "The Hunger Games."

Backstage, Kate Mulleavy cited medievalism as a starting point for inspiration that led to corseted waists, fringed jackets and, in a nod to more recent aesthetics, geometric prints.

"There are so many layers," she told AFP. "It really came from this idea of fantasy games, of role-playing... There is something interesting about classic ideas of silhouettes, but playing with them and reinventing them."

Former French Vogue editor Carine Roitfeld, a Rodarte fan since the label was founded in 2005, said the Mulleavy sisters have made "giant strides" since they started with knitwear until their use of leather today.

Marc Jacobs, who caused a stir Monday with his bold use of monochrome stripes for his eponymous label, returned to the Lexington Armory for a Marc by Marc Jacobs show where bulky scarves found their way around heads, necks and waists.

Stripes were present in many of the looks, but in greatly more accessible pastels, along with a rich inventory of checks, plaids and colorblocks in summer-friendly, loose-fitting silhouettes.