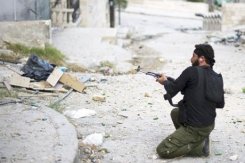 A Syrian man reacts after returning to the destroyed building of his relatives in Aleppo where his aunt, uncle and five nieces and nephews were killed in an air strike by Syrian air force warplanes. Syrian regime air strikes have targeted rebel-held police stations inside Aleppo, ahead of talks between visiting peace envoy Lakhdar Brahimi and opposition groups in the 18-month conflict.

An AFP correspondent said three loud explosions were heard in Damascus, where Brahimi spent his first night ahead of meetings with the opposition groups tolerated by the embattled regime of President Bashar al-Assad.

Among those the UN and Arab League envoy is scheduled to meet is the opposition National Coordination Committee for Democratic Change, which brings together Arab nationalists, Kurds and socialists.

Hassan Abdel Azim, spokesman for the opposition bloc, said a delegation would meet Brahimi to inform him of their suggestions for a way out of crisis.

"We support Mr Brahimi... and we will cooperate with him because the violence has reached (unprecedented) levels and the Syrian people are suffering from the killings, destruction and displacement," he told AFP.

Brahimi, who was appointed earlier this month, said the conflict was getting worse, on arrival at Damascus airport on Thursday when at least 125 people died in violence across Syria, according to a watchdog.

"We came to Syria to hold meetings with our Syrian brothers because there is a big crisis, and I think it is getting worse," the Algerian veteran troubleshooter said, quoted by Syria's official SANA news agency.

Muallem assured Brahimi of "Syria's full cooperation" and stressed that any initiative must be based on "the interests of the Syrian people and their freedom of choice without foreign intervention," SANA reported.

On the battlefront, Syrian regime forces on Friday used fighter jets and helicopter gunships to pound the city and province of Aleppo, where fierce clashes raged around a military airport, monitors said.

Warplanes bombarded the rebel-held towns of Al-Bab and Marea near Aleppo city, said the Syrian Observatory for Human Rights, adding that army forces and rebels fought around Minnigh military airport.

Despite shelling by regime forces, as seen in videos posted online, residents of Marea, Aleppo city and towns across the northern province came out for anti-regime demonstrations after the weekly Muslim prayers, activists said.

Demonstrations were also reported in the provinces of Damascus, Idlib, Daraa in the south and Hama in central Syria where an unknown number of protesters were killed as regime forces opened fire in Hama city, the Observatory said.

In the central Aleppo district of Midan, regime forces carried air strikes on two police stations which the rebels had taken over, according to Observatory director Rami Abdel Rahman.

"Whenever the rebels take a police station, the regime destroys them," Abdel Rahman told AFP by phone. "Now no one controls these posts," he said, adding that "regime forces have deployed throughout Midan to try and push out the rebels."

In the Hanano district in the northeast of Aleppo city, air strikes destroyed another police station in the hands of the rebels, Abdel Rahman said.

Just south of Damascus, the army fired live ammunition at an anti-regime demonstration in the Palestinian refugee camp of Yarmuk, according to the Local Coordination Committees -- a network of activists on the ground.

Near the capital, at least 15 soldiers were killed or wounded in an attack on their vehicle in the restive town of Douma, where clashes broke out near the municipal building, the Observatory said.

In Damascus itself, three large explosions were heard in the late morning, according to an AFP reporter. The Observatory said that security forces swept its southern districts of Midan and Nahr Aisha.

The Observatory also reported "fierce clashes" inside the capital.

At least 18 people were killed on Friday, according to the Observatory, with the highest toll in Daraa province where eight civilians, including three children, were killed in air strikes on the town of Bosra al-Sham.

The Britain-based Observatory says that more than 27,000 people have been killed since the uprising against Assad's rule erupted in March last year. The United Nations puts the toll at 20,000.

In neighbouring Lebanon, Pope Benedict XVI on Friday started a weekend visit with a call for an end to arms imports to Syria. "Arms imports must stop once and for all, because without arms imports, war cannot continue," he told reporters on his plane.

Turkish Prime Minister Recep Tayyip Erdogan, meanwhile, said the Assad regime was nearing its "inevitable" end and that his government was holding continuous contacts with the Syrian opposition.

"Assad's regime is approaching its inevitable end," Erdogan said in comments translated into Russian at a news conference in the Ukrainian Black Sea resort of Yalta.

"We must say 'No' to this human drama and not allow flames to engulf the whole region, so that the transition process could move more quickly ahead," said the Turkish leader.