Iran should "understand the message" that it needs to do more to address global concerns that it wants the bomb, following the UN atomic agency's latest board resolution, the watchdog's chief told AFP. 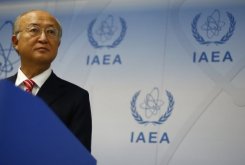 Director-General of the International Atomic Energy Agency (IAEA) Yukiya Amano listens to a question during a press conference at the IAEA headquarters in Vienna September 10. Iran should finally "understand the message" that it needs to do more to address global concerns that it wants the bomb, following the UN atomic agency's latest board resolution, the watchdog's chief told AFP.

"I hope that Iran clearly understands the message and engages with us on substance," International Atomic Energy Agency director general Yukiya Amano said in an interview.

"This is our objective.... For Iran, cooperating with the IAEA should be in their interest," the 65-year-old Japanese career diplomat, agency head since December 2009, said Thursday at the IAEA's Vienna headquarters.

In a wide-ranging interview in his top-floor office, Amano also said he was "available" for a second four-year term and that the world should "not relax" on nuclear safety despite improvements since the 2011 Fukushima disaster.

"I'm in good health, and you can see it. I'm not looking for a new job. And I'm available for the next term," he said.

On Thursday the IAEA's 35-nation board of governors approved with a crushing majority a resolution of "serious concern" that Iran continues to defy UN Security Council resolutions calling for a suspension of uranium enrichment.

This process can be used for peaceful purposes such as nuclear power or medical uses, but when highly purified can also provide the fissile core of a nuclear weapon.

The resolution also highlighted the IAEA's complaint that activities spotted at the Parchin military base, where it suspects nuclear weapons research took place, would "significantly hamper" inspectors -- should Iran let them visit.

The IAEA has pressed Iran for months to grant access to Parchin near Tehran as well as other sites, scientists and documents, in a series of fruitless meetings this year, Amano said.

Amano, who himself came back empty-handed from a visit to Tehran in May having been led to believe a deal would be signed, said that he nevertheless wants to keep trying, but not to hold talks for talks' sake.

"At the same time, dialogue for dialogue is not the purpose. I do not want to go around in circles just discussing with Iran. We need to produce concrete results."

Iran says its expanding atomic programme is for peaceful purposes, but since the IAEA says repeatedly that it is unable to vouch for this, the UN Security Council has passed six resolutions, four of them with sanctions attached.

The IAEA's resolution meanwhile also had another purpose: persuading Israel whose prime minister, Benjamin Netanyahu, has been loudly complaining that the international community is being too soft on Tehran.

"The IAEA, and myself of course, is firmly committed to dialogue. We are intensifying dialogue. I believe that the way to resolve the Iran nuclear issue is through dialogue," Amano said in the interview.

He also rejected Iranian accusations that he is a puppet of the West -- a 2009 diplomatic cable leaked by WikiLeaks said he was "solidly in the US court on every key strategic decision" -- and that the IAEA is being biased.

But Amano added: "Iran is not fully implementing these obligations. I try to reflect my findings with the utmost clarity. If it looks like it is quite strict or hard, that is because of the facts."

On nuclear safety, he said that the two areas where countries needed to do more were improving preparedness for a "severe accident" and ensuring that regulators were not toothless.

"One of the lessons we have learned from the Japanese accident was that unfortunately, the regulatory body was not independent enough and that consequently oversight ... was not sufficient," Amano said.

"The Fukushima Daiichi accident was a big wake-up call for us.... Many nuclear power plants are (now) better prepared for an emergency," he said. "Definitely safety has been enhanced. Today nobody questions that safety is first."