It's a long way from the glamour of the Champions League and the likes of Barcelona, Bayern Munich or Chelsea but the first professional football league in Afghanistan kicked-off on Tuesday to fan fever, goals and vibrant enthusiasm in Kabul. 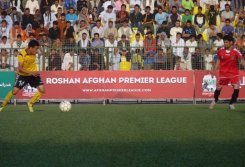 The modest stadium of the Afghan football federation was packed to a near capacity crowd of some 3,500, with the crowd largely made up of men only sections apart from a small one where families and women were welcomed by officials in a country where human rights are a constant debate.

Les Maiwand Atalan (Heroes of Maiwand), - a mythical mountain in the unstable region of the Helmand province - took to the pitch and defeated the Shaneen Asmayee (The Asmayee Eagles) 3-1 to great applause in the first match of the newly founded Afghan premier league (APL), a tournament that began Tuesday and culminates on October 19.

"I'm very proud of what we've achieved today. I'm proud that we managed to organise such an event and I would like to send more positive messages, not only about today." enthused APL commissioner Said Shafir Gawari, in the wake of a suicide attack that killed 12 people, including nine foreigners in Kabul on Tuesday.

"Most of the Afghan population are young people. They're under 25. We would like to bring our message to the majority of Afghans, and to the world, that Afghans can play together, and that we have teams composed of different tribes, of different ethnicities.

"If you look at the Kandahar team, they are not only composed of Pashtuns. They are Hazaras and other ethnicities too," continued Shafir Gawari.

Ethnic rivalries were at the root of the almost three decades of violence that has torn apart Afghanistan and fermented after the Soviet invasion of the country in 1979 coming to the boil once the Soviets left in 1989.

The Pashtuns, many of whom joined the Taliban, used military force to oppose the Tadjiks, Uzbeks and Hazares, the other dominant ethnic groups in Afghanistan.

Eight teams will meet during a group phase which determine semi-finalists and eventual finalists for a total of 16 matches, all televised across the country on two of the leading networks, one in dari, the other in pashtun, the two most popular languages.

A novel twist has also been thrown into the competition with a section of APL players being chosen from TV reality shows and an event that attracted the applications of thousands of young Afghans.

Kyrgyz lawmakers back seizure of Canadian-run gold mine