Climate change caused by global warming is slowing down world economic output by 1.6 percent a year and will lead to a doubling of costs in the next two decades, a major new report said. 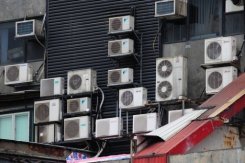 Multiple air-conditioners hang on the outside of a building in Hong Kong in February 2012. Key findings in a Climate Vulnerable Forum report include estimates that carbon-intensive economies and associated climate change are responsible for five million deaths a year, nearly all of them due to air pollution.

The DARA and Climate Vulnerable Forum report, which was commissioned by 20 governments and is due to be presented on Wednesday in New York, paints a grim picture of the economic fallout of climate change.

The "Climate Vulnerability Monitor" report finds "unprecedented harm to human society and current economic development that will increasingly hold back growth, on the basis of an important updating and revision of previous estimates of losses linked to climate change."

However, according to the report, tackling climate change's causes would instead bring "significant economic benefits for world, major economies and poor nations alike."

Key findings include estimates that carbon-intensive economies and associated climate change are responsible for five million deaths a year, nearly all of them due to air pollution.

"Failure to act on climate change already costs the world economy 1.6 percent of global GDP amounting to $1.2 trillion in forgone prosperity a year," the report says.

In addition, "rapidly escalating temperatures and carbon-related pollution will double costs to 3.2 percent of world GDP by 2030."

Although poorer countries face the steepest economic damage in terms of GDP losses, big countries will not be spared.

"In less than 20 years China will incur the greatest share of all losses at over $1.2 trillion. The US economy will be held back by more two percent of GDP; India, over five percent of its GDP," the report said.

It said these projected losses "dwarf the modest costs" of addressing climate change.

"One degree Celsius rise in temperature is associated with 10 percent productivity loss in farming," she said. "For us, it means losing about four million metric tonnes of food grain, amounting to about $2.5 billion. That is about two percent of our GDP. Adding up the damages to property and other losses, we are faced with a total loss of about three to four percent of GDP."

Jeremy Hobbs, executive director of the aid agency Oxfam International, called the report "another reminder that climate change's most savage impact is hunger and poverty."

"The economic and social costs of political inaction of unchecked climate change are staggering," he said. "Behind the statistics are the stories of real families and communities, for whom climate change means putting children to bed with empty stomachs."