The number of Marseille police suspected of involvement in corruption rose to 30 on Monday, following the suspension of an additional 18 officers from a unit in the southern French port. 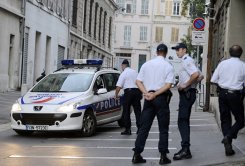 Police officers secure the entrance of the courthouse in Marseille, souhtern France, on October 5. The number of Marseille police suspected of involvement in corruption rose to 30 on Monday, following the suspension of an additional 18 officers from a unit in the southern French port.

The latest suspensions follow the indictment of 12 of the officers' colleagues Friday on charges of extortion and drug dealing.

Seven of the initial 12 have been imprisoned pending further investigation while the other five were released on bail.

The latest suspensions mean almost half of the 70-strong Anti-Criminal Brigade in northern Marseille are now under investigation in what is beginning to look like one of the most serious cases of police corruption in French history.

Most of the officers who have been charged or suspended were arrested last Tuesday following the discovery of cash and drugs hidden above a false ceiling in their office.

They are suspected of routinely stealing drugs and cash from dealers and of holding on to cigarettes confiscated from illicit sellers.

The prosecutor who pushed for action against them told Friday's indictment hearing that there was "overwhelming" proof of their guilt and described the unit they worked for as a "gangrene" in the French police.

But David-Olivier Reverdy, a spokesman for the Alliance police union in Marseille, warned against assuming all 18 of the officers who have been suspended but not charged were involved in corruption.

"These suspensions cannot be considered on the same level as those for the officers already charged," he said.

The Marseille affair is the second major corruption case to hit the French police in little over a year. Michel Neyret, the former deputy police chief of Lyon is currently under house arrest awaiting trial on charges of accepting gifts and favours from members of the city's underworld.

The charges of corruption have also undermined Marseille's attempts to shed its image as a city ridden by crime, which had already been damaged by a wave of gang violence linked to the drugs trade.

The latest round of tit-for-tat killings last month prompted calls for the army to be sent in, a suggestion the government rejected.

Biden tries to get Americans excited by his infrastructure success