Daredevil Felix Baumgartner's record-breaking jump raises hopes that pilots and even astronauts can be saved from accidents in the stratosphere, experts said on Monday. 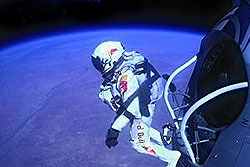 Bernard Comet of France's Institute of Space Medicine and Physiology (MEDES) said: "It proves at the very least that one can eject at extreme altitude, although this is something that hasn't been done before."

Both Viso and Comet stressed that the technical and training challenges were major.

In contrast with Baumgartner, who leapt from a balloon, a pilot who ejected would be exposed to an extreme shock from acceleration, said Comet. As in Baumgartner's descent, there would be the challenge of preventing a spin, which could cause a blackout.

"It increases the window of opportunity for saving astronauts," Viso said.

It could in theory be used in the classic rocket-and-capsule system if a problem occurs at high altitude during the launch phase, he said.

But ejecting upon re-entry, when a spacecraft is flying at supersonic speed and battling atmospheric friction, would be impossible, Viso said.

"If you re-enter at seven kilometres per second (15,600 miles per hour) in a pressure suit, you will burn up, and so will your suit," he said.

In the early years of human spaceflight, the Soviet Union's Vostok system had an ejector seat, designed for launch abort on the ground and for recovery of the one-man crew at the end of the mission.

The US Gemini system also had an ejection system in the event of a launchpad accident.

Other rocket-and-capsule systems, such as the Russian-Soviet Soyuz, the former Apollo moon missions, China's Shenzhou and NASA's planned Orion, have an abort mechanism, comprising solid rocket boosters mounted on top of the crew capsule.

They are designed to haul the capsule to a safe parachute height while the rocket is on the ground or in early launch phase. It separates and falls to earth, to save weight, when the air thins.

Baumgartner's medical director, Jonathan Clark, lost his wife, Laurel, in the US space shuttle Columbia, which tore apart on February 1 2003 as it re-entered the atmosphere.

The US space shuttle was fitted with a crew evacuation system after the 1986 Challenger disaster.

It could be used during return phase but not during launch phase. Even so, it could not have helped the Columbia crew.

Astronauts could bail out from a side hatch after donning parachutes, but only provided the shuttle was on a stable glide at a height of 20,000 feet (6,150 metres) or less.

US shaken by racist mass shooting, weekend of gun violence

Biden's visit to racist massacre site will highlight US divisions