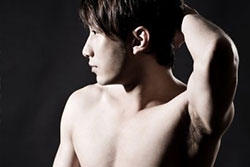 Macho but slender guys are getting media attention in Japan. ©eyedear/Shutterstock.com

The success of this book followed the publication of another ‘nikushokukei danshi’ bestseller in 2011 in the form of ‘Okinawa Firemen Calendar 2012’, which sold its first print run within two weeks. The calendar went on another limited-edition run on the internet after receiving a flood of media interest.

According the Japanese daily, these ‘nikushokukei danshi’ are “wholesome, fresh faced and bright eyed”. Quoting Japanese journalist Kiriya Takahashi's article for Happyism, the daily added that these men who can "make decisions and emerge as tomorrow's leaders" are “what Japan needs in these turbulent times.” More importantly, “any hint of lechery or violence is a definite no-no”, said Takahashi. Another quality about these ‘carnivorous men’ is that they are ‘ho macho’, which translates into slender macho, a term referring to guys who “work out but still stay svelte.”

Japan’s ‘herbivorous men’, males who choose to engage in traditionally female pursuits, are the result of Japan’s economic decline, Masahiro Yamada, a professor of sociology at Tokyo’s Chuo University, told the New York Times in 2009. He added that almost half of Japanese men aged 20 to 34 were unmarried and that nearly 30 percent of these had never had a girlfriend, contributing to the country’s shrinking population.

Sagawa Danshi is available on amazon.co.jp.