The hammer blow dealt to New York by superstorm Sandy should raise the alarm for coastal mega-cities in Asia which are more exposed but less equipped to deal with such threats, experts said on Tuesday. 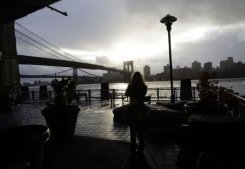 A woman takes photos of the Brooklyn Bridge from South Street Seaport as New Yorkers clean up the morning after Sandy. The hammer blow dealt to New York by superstorm Sandy should raise the alarm for coastal mega-cities in Asia which are more exposed but less equipped to deal with such threats, experts said on Tuesday.

New York was able to draw on top-level civil engineering, good governance and the world's richest economy as it faced a once-in-a-century event.

But that is not the case for many cities that have risen, often anarchically, on a coastal arc from China to the Arabian Sea, luring millions in search of a better life.

"These cities are undergoing very rapid expansion and they are not only exposed to sea-level rise, they are also exposed to tropical cyclones," said Bob Ward, director of policy at the Grantham Research Institute on Climate Change and the Environment in London.

"It is clear there isn't any urban planning going on, and they have a lot of poor people living in very low-quality housing who are going to be especially vulnerable and exposed."

A 2007 OECD study identified 20 port cities which, in terms of population, would be most exposed to coastal flooding by 2070.

"The cities with the highest protection are European countries, places like Holland have got really high (flood) defence standards, whereas some of the American cities, their defences are not that high," said Susan Hanson, an expert in coastal engineering at Britain's Tyndall Centre for Climate Change Research who co-wrote the report.

Several factors combine to make the new mega-cities so vulnerable, she said.

One is a rise in mean sea levels, which according to the study's model will be around 50 centimetres (20 inches) by 2070 as warmer temperatures cause oceans to expand.

Then there is the thrust, or wind-whipped storm surge, from cyclones, which also dump vast amounts of rain.

Some scientists say these storms could become more vicious and frequent with time, but others disagree.

Tom Mitchell, head of climate change at Britain's Overseas Development Institute, said: "There is some evidence to suggest that with climate change we might see stronger windspeeds but that the overall number of tropical cyclones will show no change or maybe even go down a little bit."

The impacts of superstorms are hugely amplified when cities strip away their natural defences and people are allowed to settle in places of risk.

In a report last March on extreme weather, the UN's Intergovernmental Panel on Climate Change (IPCC) noted that a 50cm (20-inch) rise in sea level would make much of Mumbai uninhabitable.

According to the OECD report, 1.9 million people in Mumbai were exposed to coastal flooding in 2005, a figure likely to rise to 14 million in 2070.

Awareness of the risks and good governance are key to diminishing the threat, said Ashvin Dayal, head of the Rockefeller Foundation in Asia, which supports a project to strengthen the region's climate defences.

Cities can respect flood plains and rebuild mangroves that are a natural shield against storm surge. They can improve planning to prevent dangerous sprawl and use better modelling to see how land is used.

And they can promote simple but effective techniques such as cementing the floors of a house, which means water can drain out after a flood with no damage to the building's structure.

"We have to move from a situation of looking for fail-safe solutions to a situation where you can also have safe failure," said Dayal.

"Things like this (Superstorm Sandy) do jolt people and do make people sit up and take notice. We must just make sure they don't have short memories."

ATHENS: A strong earthquake struck the Greek island of Crete early Monday, killing a man who was working in a church that collapsed and injuring 11 others, officials said.

Seven suspects arrested over the vaccination registration scam at Bang Sue central station in late July, in which people were charged to be registered illegally and jump the queue.

Afghan saffron boss says Taliban will not silence her