New Zealand out to mine tourist magic from Hobbit movies
World

New Zealand out to mine tourist magic from Hobbit movies

From a giant, bug-eyed Gollum sculpture looming over passengers at Wellington Airport to promotional banners covering the facades of entire office blocks, the upcoming "The Hobbit" movie is impossible to ignore in New Zealand. 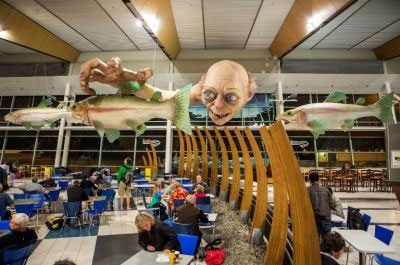 A giant Gollum creature from the "Hobbit" movie catches a fish on the ceiling of Wellington Airport on October 31, 2012. From a giant, bug-eyed Gollum sculpture looming over passengers at the airport to promotional banners covering the facades of entire office blocks, the upcoming "The Hobbit" movie is impossible to ignore in New Zealand. ©AFP PHOTO / MARTY MELVILLE

Tourism chiefs, hoping to recreate the surge in visitors inspired by the original "The Lord of the Rings" trilogy, have launched a massive marketing campaign around director Peter Jackson's latest Middle Earth three-parter.

Like the first trilogy, "The Hobbit" movies use New Zealand's mountainous scenery as a backdrop, amounting to what some tourism insiders gleefully describe as a nine-hour long advertisement for the country's rugged charms.

Tourism New Zealand chief executive Kevin Bowler does not go that far, but says the films offer the country invaluable global exposure that can be converted into increased visitor arrivals.

"We aim to show potential travellers that the fantasy of Middle Earth is in fact the reality of New Zealand," he said.

But behind the hype, official figures show the first of the new movies "The Hobbit: An Unexpected Journey" cannot come soon enough for an industry struggling for momentum almost a decade on from the original Middle Earth saga.

New Zealand's international visitor arrivals jumped from 1.5 million to 2.4 million between 2000 and 2006 on the back of "The Lord of the Rings" but have remained flat at about 2.5 million for the past four years.

A recent Tourism Industry Association report expressed concerns New Zealand had "lost its edge" and was no longer regarded as a must-see destination.

"New Zealand is perceived to have fallen off the global radar as a desirable destination to some extent," the report found.

"In part, as a result of increasing competition from other destinations, and in part because of economic conditions in (tourist) generating countries."

The earthquakes that devastated Christchurch in 2011, resulting in 185 deaths, and a local currency pushing record highs have also not helped matters.

Tourism operator David Gatward-Ferguson said that when the first "Rings" film was released in 2001, the industry was surprised by the influx of visitors wanting to travel to places featured in the movie.

"We were initially caught out, yes, and geared up over the next year or two to meet demand," he said, recalling a time when the currency was at a 25-year low and international travel was buoyed by a booming global economy.

With the entire tourism industry abuzz over potential spin-off benefits from Jackson's latest project, there is little chance operators will be wrong-footed when the first Hobbit film premieres on November 28.

Tourism New Zealand has changed its "100% Pure" global branding to "100% Middle Earth" and Wellington has dubbed itself "The Middle of Middle Earth" for the premiere, contributing NZ$1.1 million ($905,000) to the event.

The national government is so convinced of the benefits to the tourism and movie industries that when a union dispute threatened to send filming offshore in 2010, it amended the country's industrial laws to ensure it stayed.

He said the film's value lay in putting New Zealand on the agenda as a destination for ordinary travellers considering a long-haul holiday, adding that the country had become synonymous with Middle Earth and each movie release reinforced the association.

"People still talk about 'Lord of the Rings', people still remember the films. You choose to watch a film, which you don't do with an advertisement, and that makes people more receptive."

He said the incidental benefits from filming in New Zealand -- such as Orlando Bloom raving about Kiwi ski-fields or Stephen Fry waxing lyrical on Twitter about Wellington's coffee -- also drew people in.

Tourism New Zealand is not specifying how much of a lift it expects from "The Hobbit" but Gatward-Ferguson said the high local dollar and tough economic times meant it was unlikely to match "The Lord of the Rings".

"It'll be positive but it'll be muted," he said.

"There's a lot of naysayers out there and we're not going to get another wall of visitors, but New Zealand is small enough that we only need to win over a small proportion of the world market to make a big difference."

The Kiwi dollar has almost doubled against the greenback since the first movie, currently around 83 US cents and tipped to threaten a record high of 88.43 US cents set in August 2011, compared to 43 US cents in late 2001.

The doubters have not prevented Gatward-Ferguson from expanding his fleet of off-road expedition vehicles by five and buying Hobbit-themed licence places to adorn them, including "Bilbo", Smaug" and "Thorin", all characters in the movies.

"We've come to our own conclusions, made our investment and now we've just got to wait and see if we were right," he said.