European leaders flew to impoverished Laos Monday on a mission to reassure Asia they are finally getting a grip on the eurozone debt crisis during a major summit in the tiny landlocked nation. 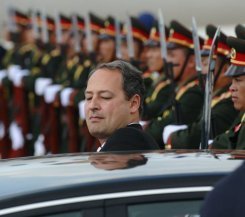 Laos' President Choummaly Sayasone (L) welcomes France's President Francois Hollande prior to a meeting as part of the ninth Asia-Europe (ASEM 9) summit in Vientiane, on November 5. The debt-laden European nations will lobby Asia's economic dynamos for help to calm the crisis raging in the eurozone.

Hollande said the main aim of his first trip to Asia since taking office in May was to bring the message that "Europe is still an economic power".

"I'm here to reassure Asian countries" but at the same time "to tell them that they also have a role to play in European and global growth", he added.

"Asians have gained a lot from our growth. Now it's time for them to boost our growth with their demand."

For years Western outrage over Myanmar's human rights abuses -- including the longtime detention of Nobel laureate Aung San Suu Kyi and other political prisoners -- was a major cause of friction between the two regions.

Unlike other participating nations, Myanmar was only allowed to send its foreign minister to previous Asia-Europe summits.

But after reforms including the release of political detainees and Suu Kyi's election to parliament, the West has begun easing sanctions to reward President Thein Sein, who is now on the summit guest list.

Optimism over the sweeping changes, however, has been dampened by deadly clashes between Buddhists and stateless Rohingya Muslims in Myanmar's western state of Rakhine.

British Foreign Secretary William Hague called on Myanmar to address "the unresolved problems of the status of the Rohingya people".

"That's an issue of major concern for us. I'll certainly raise that with the Burma leaders here when I have the opportunity to do so," he told reporters in the Laos capital Vientiane.

Dozens of people have been killed and more than 100,000 displaced since June by the unrest.

"But the fact that we can meet here in the heart of Southeast Asia almost without having Myanmar as an issue centre-stage as it has been in the past is a reflection of how far Myanmar has travelled in terms of its democratic transition," he added.

The Association of Southeast Asian Nations has been accused by the West in the past of turning a blind eye to human rights abuses by the generals who ran Myanmar for decades.

European Union president Herman Van Rompuy is also among those converging on Laos, a poor country of just six million people on the verge of joining the World Trade Organisation as it opens up its fast-growing economy.

The diplomatic offensive is seen as a sign of the growing importance that Europe places on Asia's vibrant economies, and its desire to counter increased US engagement in the region.

"With the EU in the middle of a lost decade and facing protracted recession and fiscal austerity, European political and business leaders are turning to Asia's fast-growing economies for economic salvation," said Rajiv Biswas, Asia-Pacific chief economist at consultancy firm IHS Global Insight.

"The strategic importance of Asia to Europe both politically and economically is set to rise rapidly over the next decade."

The Asia-Europe Meeting, held every two years, provides an opportunity to strengthen trade links between two regions that together account for about half of global economic output.

"We are able to offer many areas of investment and trade for them. I think the opportunity is there for both sides," Philippine Foreign Secretary Albert del Rosario told AFP.

Europe's leaders may also lobby Chinese Premier Wen Jiabao to deploy some of Beijing's trove of about $3 trillion in foreign exchange reserves -- the largest in the world -- to invest in EU bailout funds.

Some Asian participants, including the Philippines, also want to put Asia's maritime sovereignty disputes on the table, but China is likely to resist.