Happy Obama promises ''the best is yet to come''
World

Happy Obama promises ''the best is yet to come''

President Barack Obama told cheering supporters early Wednesday that ``the best is yet to come'' for the United States as he stormed to a second term by defeating Republican Mitt Romney.

"This election is over, but our principles endure,'' said Mr Romney, a former governor of Massachusetts.

The Democrats retained their hold in Senate and the Republicans retained control of the House of Representatives, projections said on Wednesday, raising the prospect of more partisan gridlock in a divided US Congress.

Voters in Illinois, the home state of Mr Obama, also elected the first person of Thai origin to a seat in the US Congress.

"I feel fantastic,'' said Ladda Tammy Duckworth, a Thai-American who was defeated in her first attempt to win a seat in the House of Representatives in 2010, but prevailed in Tuesday's nationwide election. 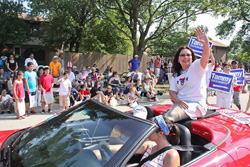 Ladda Tammy Duckworth, a Thai-American, celebrates her victory after voters in Illinois elected her to the Congress.

Ms Ladda, more popularly known as Tammy, is a member of Mr Obama's Democratic Party. She also is a partially disabled war hero from the Iraq conflict, who unseated outspoken Republican Congressman Joe Walsh to win her seat.

She will officially assume her new position as a member of the US congress on Jan 3.

The daughter of a US military veteran and a Thai mother, Ms Tammy flew combat helicopters in the Iraq war, until she was shot down. The chopper crash crushed her legs, both of which were amputated.

She speaks fluent Thai, as she demonstrated in a TV interview with Sorayuth Suthassanachinda in 2008.

Her election campaign had direct backing from Mr Obama, including a recorded `"robocall'' to voters' telephones.

"Tammy served our country with valour,'' said Mr Obama in the call. "She was a tireless advocate for veterans as a member of my administration and she will be a powerful voice for the middle class. Now we need her in Congress to fight for good jobs, to improve public education and to strengthen the middle class.''

She was appointed to a senior position in the Department of Veterans Affairs after Mr Obama took office.

At a raucous Chicago victory party with wife Michelle and daughters Sasha and Malia, Mr Obama returned to the themes of his re-election bid, vowing to fight for the middle class and the American dream.

"In this election, you, the American people, reminded us that while our road has been hard, while our journey has been long, we have picked ourselves up. We have fought our way back,'' Mr Obama told hundreds of cheering supporters.

"We know in our hearts that for the United States of America the best is yet to come.''

Mr Obama said he had spoken to Mr Romney, congratulating him and his running mate Paul Ryan on a "hard-fought campaign'' and vowing to sit down with the former Massachusetts governor to discuss the way forward.

"We may have battled fiercely but it's only because we love this country deeply and we care so strongly about its future,'' Mr Obama said.

Near the end of his speech Mr Obama hinted at a more far-reaching agenda in his second term despite the lingering partisan gridlock in Washington, calling for a future that "isn't threatened by the destructive power of a warming planet''.

"I believe we can seize this future together because we are not as divided as our politics suggest. We're not as cynical as the pundits believe. We are greater than the sum of individual ambitions,'' Mr Obama said. 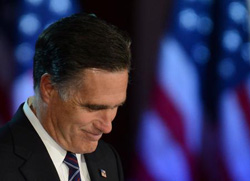 US Republican presidential candidate Mitt Romney arrives on stage to concede the election to President Barack Obama in Boston. (Photo by AFP)

Mr Romney conceded defeat in the US election early Wednesday, telling supporters that he had called Mr Obama to congratulate him on his victory.

"His supporters and his campaign also deserve congratulations,'' Mr Romney said in a brief address at his election watch party in Boston.

"I wish all of them well, but particularly the president, the first lady and their daughters.''

Mr Romney returned to a theme that he began injecting into his stump speeches in the closing two weeks of the campaign: the need for greater bipartisanship in Washington.

"At a time like this, we can't risk partisan bickering and posturing,'' he said.

"Our leaders have to reach across the aisle to do the people's work and we citizens have to rise to the occasion.''

Mr Romney also thanked his running mate, Congressman Paul Ryan of Wisconsin, as well as wife Ann Romney, his tireless surrogate on the campaign trail whom he called "the love of my life.''

Trump tried to force limo to Capitol on day of riot: WH aide