Neil Lennon said Celtic are in a great position to qualify for the last 16 of the Champions League after his injury-ravaged side produced a shock 2-1 defeat of Group G favourites Barcelona at Parkhead on Wednesday. 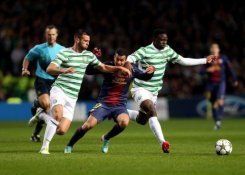 Celtic manager Neil Lennon celebrates at the final whistle during their UEFA Champions League Group G match against Barcelona, at Celtic Park in Glasgow. Celtic sent shockwaves around Europe as they produced a stunning 2-1 win to end the Catalan giants' 100 per cent record in this season's competition.

However, the 41-year-old Northern Irishman - who is in charge of his first Champions League campaign with the club - added the biggest problem they faced was to cope with the fans expectations that they would reach the Last 16.

"It (the victory) gives us a great chance; maybe a greater chance than we expected before the game but we still have two very difficult games," he said.

"The problem myself and the players will have to deal with now is the expectation level will increase. There is still a lot of hard work to be done but we’ve given ourselves a fantastic platform."

Celtic could now qualify from the group stages for only the third time in their history if they get a score draw or better against Benfica in two weeks time.

Barcelona still top the group on nine points with Celtic two points behind while Benfica are third on four points having beaten Russian opponents Spartak Moscow 2-0 on Wednesday.

"We have to go to Benfica now and try and raise our game again but we will cross that bridge when we come to it," said Lennon, who earlier in the campaign saw Celtic end a woeful record when they recorded their first ever away win in 21 Champions League games with a 3-2 win over Spartak Moscow.

"I want them to enjoy their evening and enjoy their moment and get back to domestic duties on Sunday.

"These are special nights here. When I came back I said I wanted to bring the thunder back here and I have never heard the atmosphere as good as that."

Lennon said he couldn't be prouder of the team's performance, especially as they were missing several first team regulars.

Goals from the outstanding Victor Wanyama and 18-year-old Tony Watt gave them a 2-0 lead and Lionel Messi's stoppage time goal was not enough to stop the Spanish giants going down to their first defeat in the Champions League group stage in three years.

Lennon, who played in the Celtic side that defeated Barcelona in the Last 16 of the UEFA Cup in the 2003/2004 season, said the result was his greatest in management, coming on the day after the club celebrated its 125th birthday.

"I think it’s one of the greatest nights in the club’s recent history.

"It was very poignant on the club’s 125th anniversary that we got to play Barcelona in such a prestigious game and then to win the game under huge difficulties was amazing.

"The players are heroes. I can’t speak highly enough of their performances and they will go down in the history books of the club as the team that beat probably the best team in the world.

"They have been given two of the stiffest examinations (the 2-1 defeat by Barcelona a fortnight ago and Wednesday's match) they will ever get in their careers and they have come through it with flying colours.

"It’s one of the proudest nights of my career, it was a monumental achievement from the players.

"As a manager I don’t know if I’ll top that but I hope I do and progress.

"We’ve waited a long time to get back into this competition. The club has been in the doldrums a little bit.

"I’m not saying this is the pinnacle because I still think there is more to come from this team but the progression has been great."

The Bank of Thailand approved the extension of its 500-billion-baht soft loan scheme by six months, and allowed companies listed on the Market for Alternative Investment to apply for the loans, a previous obstacle to participation.