Syria's deeply divided opposition has agreed to unite against President Bashar al-Assad, electing a moderate cleric as leader in a move hailed by the West as a step towards a peaceful political transition. 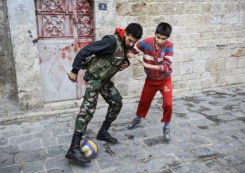 Syrians cross the border between the Syrian town of Ras al-Ain and Turkey's Sanliurfa province town of Ceylanpinar, on November 11. Syria's deeply divided opposition has agreed to unite against President Bashar al-Assad, electing a moderate cleric as leader in a move hailed by the West as a step towards a peaceful political transition.

After four days of marathon talks in Qatar, the Syrian National Council (SNC) on Sunday finally signed up to a wider, more representative bloc centred on a government-in-waiting, as demanded by Arab and Western states.

The breakthrough came amid Western concerns the Syrian conflict is increasingly spilling over its borders, after Israel fired a warning shot across the UN-monitored ceasefire line between Syria and the occupied Golan Heights.

The United States swiftly declared its support for the new National Coalition.

"We look forward to supporting the National Coalition as it charts a course toward the end of Assad's bloody rule and the start of the peaceful, just, democratic future that all the people of Syria deserve," State Department deputy spokesman Mark Toner said in a statement.

The Israeli warning shot came after a mortar round from the Syrian side hit an Israeli position.

It followed comments by Prime Minister Benjamin Netanyahu that Israel was "ready for any development" and as his defence minister warned a "tougher response" would follow.

"The secretary general is deeply concerned by the potential for escalation," said the UN spokesman Martin Nesirky.

"He calls for the utmost restraint" and urges both side to uphold the 1974 accord which set up a ceasefire line and demilitarized zone which is patrolled by UN forces.

"Our people are subjected to a systematic genocide," he said at the signing ceremony in Doha.

The newly-elected head of the SNC George Sabra said that Syrian rebels need weapons "not just bread and water."

"We will seek a full recognition of this new body," Sheikh Hamad said.

Reservations in SNC ranks about what many members saw as a move to sideline it had prompted repeated delays in the Doha talks and mounting frustration among other dissident groups and the opposition's Arab and Western supporters.

But after negotiations ran into the early hours of Sunday and resumed in the afternoon, the anti-Assad factions agreed to form a "National Coalition of Forces of the Syrian Revolution and Opposition."

"We signed a 12-point agreement to establish a coalition," said Seif, who championed the US-backed reform proposals on which the agreement was based.

In a copy of the document obtained by AFP, the parties "agree to work for the fall of the regime and of all its symbols and pillars," and rule out any dialogue with Assad's government.

They agreed to unify the fighting forces under a supreme military council and to set up a national judicial commission for rebel-held areas.

Former Syrian premier Riad Hijab who defected in August hailed the agreement as "an advanced step towards toppling the regime."

The deal came after the SNC, previously seen as the main opposition group, heeded Arab and Western pressure to embrace groups that had been unwilling to join its ranks.

Khatib, the imam of the central Umayyad mosque in Damascus before he was arrested for supporting the uprising, is seen as an independent as he is not linked to the Muslim Brotherhood or any other Islamist party.

His deputies also hail from mixed backgrounds, with Seif reportedly backed by Washington and Atassi belonging to a Homs family active in the secular opposition. A third vice president post will remain vacant for a Kurd.

There had been mounting pressure for an overhaul amid US-led accusations that the SNC had lost touch with civilian activists and rebels inside Syria and become little more than a talking shop for exiles.

Concern had been further raised by the fears of a spillover of the conflict as fighting raged on Syria's borders with Iraq and Turkey as well as on the armistice line with the Israeli-occupied Golan.

Nationwide violence killed at least 86 people on Sunday, including 34 civilians, the Observatory said, among more than 37,000 who have lost their lives since the uprising erupted in March 2011.