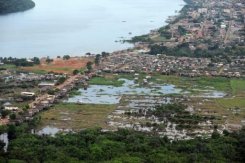 Aerial of an area in Altamira, Para state, Brazil, in May 2012, that will be flooded by the Belo Monte hydroelectric plant on the Xingu River. Work on Brazil's controversial $13 billion Belo Monte mega-dam ground to a halt Monday after protesters torched buildings at three dam construction sites over the weekend, the developer said.

Saturday, "a group of 30 people set fire to prefab structures at the Pimental site. They went into the cafeteria, destroyed everything and robbed the till" before setting it ablaze, said Fernando Santana, spokesman for builders Consorcio Constructor Belo Monte (CCBM).

"On Monday, as a precautionary security measure, all activities were suspended at the construction site," said Santana, suggesting that "vandals" might be trying to derail salary renegotiation under way.

The state-owned Norte Energia hired CCBM to build the dam, which is set to be the world's third largest when it has been completed. Between 12,000 and 13,000 workers at the site on two shifts, Santana said.

The incidents broke out after CCBM proposed a seven percent wage hike to the workers in an area where the inflation rate is at 30 percent, said Xingu Vivo, a non-governmental group opposing the dam.

Indigenous groups fear the dam across the Xingu River, a tributary of the Amazon, will harm their way of life. Environmentalists have warned of deforestation, greenhouse gas emissions and irreparable damage to the ecosystem.

The dam is expected to flood some 500 square kilometers (200 square miles) along the Xingu and displace 16,000 people, according to the government, although some NGOs put the number at 40,000 displaced.

The natives want their lands demarcated and non-indigenous people removed from them, as well as a better healthcare system and access to drinking water.

Expected to produce 11,000 megawatts of electricity, the dam would be the third biggest in the world, after China's Three Gorges facility and Brazil's Itaipu Dam in the south.

It is one of several hydroelectric projects billed by Brazil as providing clean energy for a fast-growing economy.