Hundreds of thousands of protesters swamped Madrid in a mass outcry against austerity Wednesday, capping strikes across southern Europe that boiled over into sporadic clashes. 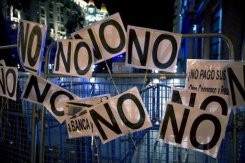 Protesters attend a demonstration during a general strike in Madrid. Hundreds of thousands of protesters swamped Madrid in a massive rejection of austerity on Wednesday, capping Europe-wide strikes that boiled over into sporadic clashes.

Chanting, whistling and setting off firecrackers, people filled the centre of the Spanish capital after millions joined strikes in Spain and Portugal and stoppages in Italy and Greece.

"They are taking away our future," declared banners hanging in the main squares of Madrid where people massed, flanked by riot police and overseen by a helicopter.

"We have the solution, send the bankers to prison!," protesters chanted amid a sea of union flags.

"A magnificent night in Madrid!" the secretary general of Spain's biggest Comisiones Obreras union, Ignacio Fernandez Toxo, told the crowds, estimating their number at more than a million.

General strikes in Spain, where unions claimed many millions abided by the action, and Portugal paralysed swathes of industries and hit road, rail and air transport.

It was the broadest coordinated European industrial action since the crisis broke out, unions said.

The vast majority of the protests were peaceful despite a seething frustration among millions at the high unemployment, recession and a seemingly relentless austerity squeeze.

But some police and protesters clashed, sometimes brutally, in Spain, Portugal and Italy.

After engaging in sporadic skirmishes through the day, battles broke out again at the tail end of the rallies in Spain.

Police charged scores of demonstrators at the central Neptuno square near the Spanish lower house of parliament after coming under a hail of broken bottles and stones, AFP journalists saw.

Not far from the capital's main railway station Atocha, police fired rubber bullets into the ground and air to disperse scores of youths who threw bottles and stones at them.

Rubbish bins stood in flames near the station and at all the shop windows of a KFC fast-food store were shattered. Passers-by later applauded firefighters who extiguished the flames.

In the northeastern city of Barcelona, where tens of thousands protested, a group of young people put a home-made device in a police car, which was seen with flames spewing out the windows.

Police charged the gangs of youths to try to disperse them.

But the government insisted violence and strike participation was down from Spain's last general strike, held in March.

Portuguese police charged protesters who had gathered in front of the parliament building in Lisbon, striking them with batons after demonstrators hurled stones and rubbish at them.

Five protesters were injured and one had to be hospitalised, a police spokesman said.

In Italy, 17 police were wounded in clashes as tens of thousands of students and workers took to the streets of Rome, Milan, Turin and around 100 other towns and cities.

About 20 activists were seen beating an officer with sticks and baseball bats in Turin, while a dozen officers were hurt in running street battles in the centre of Milan, police said.

In Rome, dozens of young protesters hurled stones and bottles and smashed up cars as they tried to break through lines of police who responded with tear gas and used armoured cars to force them back.

Both Portugal and Spain have legislation guaranteeing minimum services in essential industries.

Portugal's TAP said it was grounding more than 170 flights, most of them international.

Greece's unions are focused on the national crisis and their protest was limited to a three-hour work stoppage and a rally in Athens estimated at 5,000 people by police.

Union-led rallies to support the day of action were being held in France, Belgium and in Poland, where workers decried a "social and wage-dumping" in their country.

Thousands of people took to the streets in cities across France, protesting at salary cuts, tax hikes and spending cuts in the eurozone's second biggest economy.

The strike coincides with a heated debate over the pursuit of austerity policies in the midst of recession around the eurozone.

The International Monetary Fund admitted last month that it had underestimated the extent to which such measures brake economic growth, opening the way to relaxed deficit-cutting targets in countries such as Portugal.