God should have a Leica, says Lou Reed
World

God should have a Leica, says Lou Reed

God should have a Leica camera, Lou Reed pronounced on Wednesday, as the US rock legend unveiled a book of photography spanning four decades of his "adventures with light". 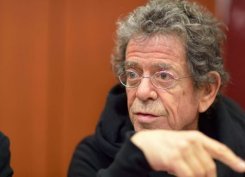 US rock star and photographer Lou Reed gives a press conference to present his book "Rhymes" in Paris. Reed unveiled a book of photography spanning four decades of his "adventures with light".

Quizzed about the enigmatic phrase, which prefaces the weighty tome of some 300 landscapes, skylines, cities and abstract images shot around the world, Reed told reporters:

"I did say that -- and I believe it too. He or she should have a Leica, no question about it."

The phrase "was a small homage" to the classic cameras, the 70-year-old quipped.

Entitled "Rhymes/Rimes" and published in France, Reed's book retraces 46 years of images, from his Andy Warhol-influenced 1960s to the present, with candid shots of his wife the performance artist Laurie Anderson among the few portraits in the collection.

"I'm a graduate of Warhol university," Reed joked. "I was very, very lucky to be around Andy Warhol and the various people and artists he gathered around him to be part of what came to be known as The Factory.

"And I really, really paid attention to what he was doing. Look at what he did to photos from a newspaper with colour -- it's amazing."

Without titles, dates, place names or captions of any kind, Reed's own book of photography is intended as a "visual poem", he said.

"That's why it's called Rhymes," he said. "It's really better just to let people look at it, it doesn't matter when or where it is, so I took all the titles and burned them. Bye bye titles!

"Doing things chronologically was really boring. But if you used it as a narrative, as a long poem -- then things got interesting," he added.

Asked how he works, Reed said he always carries a camera in his pocket -- he was fondling a little Sony throughout the press conference -- and acts "pretty well on instinct".

"It's all about the light as far as I'm concerned. I love looking through a lens, and focusing it and cropping it the way I want."

He also said he didn't hesitate a second before going digital.

"I love digital photography -- I love everything about it," he said.

"Getting to see it immediately, so if you didn't get the light right, the exposure right, if the ISO wasn't right, you can correct it -- hopefully til you get it right."

Dressed in black sweatshirt with wiry little spectacles, Reed lived up to his reputation as a tough client for the press.

"Clouds are free," came the deadpan response to one journalist quizzing him about his fondness for skylines.

"You can't make a doughnut smart," was his stinging reply to another, before "You are joking, right?" to a reporter who ventured to ask if photography offered him a form of escape.