The producers of "The Hobbit" movies on Tuesday rejected allegations that animals died due to mistreatment during the making of Peter Jackson's highly anticipated Tolkien trilogy in New Zealand. 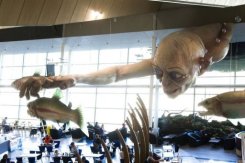 A giant Gollum creature from "The "Hobbit" movie catches a fish on the ceiling of Wellington airport on October 31, 2012. The producers of "The Hobbit" movies have rejected allegations from animal rights group PETA that animals have died during the making of the highly anticipated Tolkien trilogy in New Zealand.

Animal rights group PETA said up to 27 animals, including horses, sheep, goats and chickens, died during filming, prompting it to plan protests against the movies, the first of which has its world premiere in Wellington next week.

Jackson and the producers said in a statement that the American Humane Association monitored all use of animals during the shoot and "no animals died or were harmed on set during filming".

"The producers completely reject the accusations that 27 animals died due to mistreatment during the making of the films," the statement said.

"Extraordinary measures were taken to make sure that animals were not used during action sequences or any other sequence that might create undue stress for the animals involved."

It added that 55 percent of shots featuring animals in the three films, which were shot back-to-back with a budget estimated at US$500 million, were computer-generated.

PETA said most of the allegations it was raising did not occur on set while cameras were rolling, but at farms and stables where the animals were housed.

It said some wranglers involved in the project -- who the producers said had been sacked more than a year ago -- reported two horses died from broken necks after being forced off steep embankments by other animals in their paddocks.

PETA US senior vice president Lisa Lange said sheep and goats died from worms and after falling into sinkholes in rugged terrain, and a dozen chickens were mauled to death by dogs.

"This production's decision to use numerous live animals and allow them to suffer needlessly takes the entertainment industry a giant and disgraceful step backwards," she said in a statement.

PETA spokeswoman Claire Fryer alleged that during a location shoot a misbehaving horse was left on the ground for three hours with its legs tied together, suffering rope burns that were covered with make-up during filming.

The first of the three movies, "The Hobbit: An Unexpected Journey", premieres in Wellington on November 28 and will be released worldwide in December.

PETA said it would protest at the event and at premieres in the United States and Britain.

"It's important that movie-goers are made aware of this," Fryer told AFP.

The producers said they took animal welfare seriously and had pursued the highest level of care for those used in the films.

"We regret that some of these accusations by wranglers who were dismissed from the film over a year ago are only now being brought to our attention," they said.

NASA's Mars copter flight could happen as soon as Monday