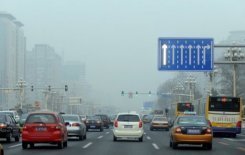 File picture of vehicles travel along the central east-west axis of Chang'An Avenue in Beijing on a smoggy day on November 2009. The volume of greenhouse gases causing global warming rose to a new high last year, the UN World Meteorological Organisation said Tuesday.

"The amount of greenhouse gases in the atmosphere reached a new record high in 2011," the WMO said as it launched its annual Greenhouse Gas Bulletin report, pointing out that the worst warming gases -- carbon dioxide, methane and nitrous oxide -- had all reached new highs.

That is 140 percent of the "pre-industrial level" before 1750, WMO said, adding that in the past 260 years about 375 billion tonnes of carbon have been released into the atmosphere as CO2.

"These billions of tonnes of additional carbon dioxide in our atmosphere will remain there for centuries, causing our planet to warm further and impacting on all aspects of life on earth," WMO Secretary-General Michel Jarraud said in a statement.

"Future emissions will only compound the situation," he cautioned.

He pointed out that so-called "carbon sinks", including oceans, have until now absorbed nearly half of the carbon dioxide emitted by humans, but stressed that "this will not necessarily continue in the future."

Five major gases account for 96 percent of the warming of our climate, according to the WMO, which released its annual Greenhouse Gas Bulletin ahead of a new round of UN climate talks in Doha later this month.

"Between 1990 and 2011, there was a 30 percent increase in radiative forcing -- the warming effect on our climate -- because of carbon dioxide and other heat-trapping long-lived gases," the WMO said.

Methane, produced by natural sources such as wetlands, cattle-rearing and landfills, is the second most important greenhouse gas after carbon dioxide, followed by nitrous oxide, it said.

The WMO said levels of atmospheric methane had reached new highs in 2011, at 1813 ppb.

Also worrying was the increase in nitrous oxide levels, the WMO said, since its impact on climate is almost 300 times greater than that of carbon dioxide.

The gas, emitted into the atmosphere from natural and man-made sources, also plays an important role in the destruction of the ozone layer which protects the Earth from harmful ultraviolet rays, the WMO said, indicating that its atmospheric concentration in 2011 was about 324.2 ppb, up 1.0 ppb from 2010.