Syria's Arab-led rebels seized new territory in the eastern Euphrates valley from government forces on Thursday but ran into resistance from Kurdish militia on the Turkish border in a potential new security concern for the key NATO member. 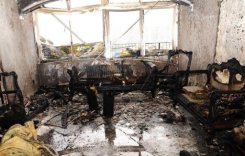 Damage at a house in the Mezzeh district of Damascus is pictured after it was target by mortar fire, in this photo provided by the Syrian Arab News Agency. Syria's Arab-led rebels seized new territory in the eastern Euphrates valley from government forces on Thursday but ran into resistance from Kurdish militia on the Turkish border in a potential new security concern for the key NATO member.

Rebel fighters captured the Euphrates town of Mayadeen in a drive up the strategic valley from the Iraqi border, bringing the largest single swathe of territory in the country under their control, the Syrian Observatory for Human Rights said.

But farther north, in the battlefield town of Ras al-Ain on the Turkish border, mainly jihadist rebel forces were in a standoff with Kurdish militia with links to Ankara's longtime foe, Kurdistan Workers' Party (PKK), the largest such confrontation so far in the 20-month uprising.

In the face of the growing turmoil on its southern border, Turkey has asked its NATO allies to deploy surface-to-air Patriot missiles to protect its frontiers, but Russia spoke out strongly on Thursday against any such move.

Syrian government troops withdrew west towards the provincial capital and oil hub of Deir Ezzor as the rebels moved into the strategic town of Mayadeen, the Syrian Observatory said.

"The area east of the city of Deir Ezzor, on the Iraqi border, is now the largest area in the entire country that is out of army control," said the Observatory's director, Rami Abdel Rahman.

Despite its losses on the battlefield, the government of President Bashar al-Assad remains in control of most of the province's oil and gas fields, the Britain-based watchdog said.

On the Turkish border, hundreds of Kurdish militiamen massed in the frontier town of Ras al-Ain in a mounting standoff with mainly jihadist rebels who had seized much of it from government forces, the Observatory said.

It was the latest in a string of drives for control of mainly Kurdish inhabited areas of the northeast and northwest that neighbouring Turkey fears has given succour to the rebel PKK it has been fighting for nearly three decades.

The Turkey-backed rebels of the Free Syrian Army accuse the Democratic Union Party (PYD) of having links to the PKK, which has been fighting for self-rule just across the border in southeastern Turkey since 1984.

The PYD says its fighters are entirely Syrian but Washington has backed Ankara in insisting that Syria will not be allowed to become a rear base for the PKK as central government control diminishes.

Some 200 fighters from the Al-Qaeda loyalist Al-Nusra Front and 100 from the allied Ghuraba al-Sham advanced on Ras al-Ain, backed by three tanks they had captured from the Syrian army, the Observatory said.

"Most residents have fled, and the few who remain are living in fear, in poor humanitarian conditions," one of them, Abu Mohammed, told AFP.

The Ghuraba al-Sham called in a video posted on the Internet for Islamist volunteers to flock to Ras al-Ain for a drive on the provincial capital Hasakeh.

"We of the Ghuraba al-Sham battalion call on the (mainstream rebel) Free Syrian Army and the mujahedeen to advance towards Ras al-Ain," an unidentified rebel commander said in the footage, standing among some 50 fighters.

"And we warn all those who stand in the way of this revolt... especially the PYD and the PKK, and any other armed group, against taking any action that contradicts with the path of the revolution," he added.

The Russian foreign ministry said that Turkey's appeal to its NATO allies for Patriot missiles on its southern border was a "worrying sign."

NATO chief Anders Fogh Rasmussen said on Wednesday that the alliance would consider the request for Patriots "without delay.".

Analysts have expressed fears that Turkey is keen not only to back the revolt, but also to use the unrest in Syria to hit back against the PKK.

Thursday's violence across Syria killed at least 81 people, among them 38 civilians, according to a preliminary count by the Observatory, taking the overall toll since the uprising erupted in March last year to more than 40,000.

The spread of Syria's civil war has made it increasingly difficult for civilians to escape the conflict, and many are afraid to seek medical care, the head of the International Committee of the Red Cross said.

"Through the spreading of the fighting, people lose... escape routes out of the fights," Peter Maurer told reporters.