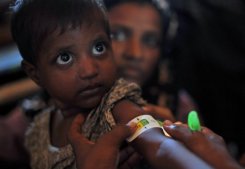 A Muslim Rohingya child receives medical care at a clinic on the outskirts of Sittwe on November 2. The UN's refugee agency has begun airlifting tents to provide shelter for thousands of people displaced by sectarian unrest in Myanmar's western Rakhine State.

"The plane that left Dubai today (Friday) is the first of two planned flights for this weekend," UNHCR spokesman Adrian Edwards told reporters in Geneva.

In total, he said, the UNHCR would provide 3,500 family-sized tents to house 17,500 displaced people.

"The shelter needs are immense," he said, pointing out that the renewed violence in late October had brought the number of people internally displaced in the area to around 115,000.

"The displaced population is in urgent need of a safe place to stay," Edwards said.

More than 100,000 people have been displaced and about 180 killed since clashes between ethnic Rakhine Buddhists and Rohingya Muslims erupted in June, followed by another outbreak of violence in October.

Most of the displaced are stateless Rohingya, considered by the UN to be among the most persecuted minorities in the world. They are crammed into makeshift camps.

The international community has urged Myanmar, which does not recognise the Rohingya as citizens, to address the group's plight and the world's top Islamic umbrella group has described their treatment as a "genocide".

The UNHCR stressed that the existing camps were overcrowded, while host families who had taken in people fleeing the violence were struggling even to support themselves.

"Some people are living on the sites of their burnt-out homes while others are sleeping on boats or taking refuge on islets," Edwards said.

The agency said it had already distributed more than 500 tents from its stocks inside the country since the violence broke out in June, as well as 700 tents donated by the Korea International Cooperation Agency.

It had also already handed out aid to more than 50,000 displaced people in the region, including blankets, mosquito nets, kitchen sets, clothing and hygiene materials, Edwards said.

However, another 25,000 relief kits were urgently needed, he said, adding that the UNHCR and other agencies needed $24.35 million (18.9 million euros) to meet the needs for emergency shelter, non-food relief items, camp management and security until next June.

The UNHCR was also deeply concerned about "increased restrictions on movement (since June), which is affecting people's livelihoods and food security."

"Access to basic services has also been difficult, he said, cautioning that "if not addressed, these problems could trigger further displacement."