Egyptian President Mohamed Morsi said on Sunday the sweeping new powers he has assumed are only temporary and called for dialogue, as clashes in the Nile Delta saw a member of his party killed, medics said. 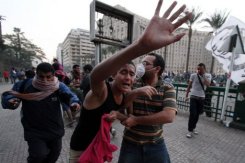 Egyptian protesters hurl stones towards riot police during clashes at Simon Bolivar square in Cairo as the Muslim Brotherhood called for nationwide demonstrations in support of Islamist President Mohamed Morsi. Egypt's president said on Sunday the sweeping new powers he has assumed are only temporary and called for dialogue, as clashes in the Nile Delta saw a member of his party killed.

Morsi's constitutional declaration on Thursday, allowing him to issue decisions and laws unchallenged, triggered a wave of protest and has set him on course for a showdown with Egypt's judges, whom he is due to meet on Monday in a bid to defuse the crisis.

Clashes between supporters and opponents of the president, outside a Muslim Brotherhood headquarters in Damanhour, saw one Islamist killed and 10 people wounded, a doctor at the hospital in the Nile Delta town told AFP.

Witnesses said the clashes, in which protesters hurled petrol bombs and stones, followed three days of unrest there, with Morsi's opponents trying to storm the Brotherhood office.

Several offices belonging to the Muslim Brotherhood's Freedom and Justice Party have been torched since Thursday's announcement.

"The death of this young Islamist and the fires targeting the party's offices show that certain people are trying to lead the country towards chaos," the party's president Saad Al Katatni said on his Facebook page.

Last week's constitutional declaration states that Morsi can issue "any decision or measure to protect the revolution," which are final and not subject to appeal.

The announcement has sparked charges that he is taking on dictatorial powers.

In a move to assuage his critics, Morsi is to meet the Supreme Judicial Council on Monday, after his justice minister Ahmed Mekki held preliminary talks with the council, the president's spokesman Yasser Ali said.

The president on Sunday emphasised the "temporary nature" of the new measures, which would apply only until a new constitution is adopted and elections held, and which "are not meant to concentrate power," but devolve it to a democratically-elected parliament.

The measures were also "deemed necessary in order to hold accountable those responsible for the corruption as well as the other crimes during the previous regime and during the transitional period."

Long-time president Hosni Mubarak was sentenced to life, along with his interior minister, over the killing of protesters in the uprising last year that eventually ousted him, in which some 850 activists died.

New investigations have been ordered into the deaths, and new prosecutor general Talaat Ibrahim Abdallah said "revolutionary courts" would be set up.

The presidency also on Sunday stressed its commitment to engaging all political forces in dialogue "to reach a national consensus on the constitution, which will be the cornerstone of Egyptian modern institutions."

Former UN nuclear watchdog chief Mohamed ElBaradei, and former presidential candidates Hamdeen Sabbahi, Amr Mussa and Abdelmoneim Abul Futuh, said in a joint statement on Saturday that they would have no dialogue with Morsi until he rescinded his decree.

Tahrir Square, one of the capital's crossroads, remained closed to traffic on Sunday as Morsi opponents pressed a sit-in, while nearby clashes between police and protesters, which entered their second week, occasionally spilled into the square.

Separately, hundreds of Morsi supporters demonstrated in front of mosques in Cairo and across the country in protests called for by the Muslim Brotherhood.

Riot police began erecting a concrete barrier to keep the Tahrir protesters away from nearby government buildings, witnesses said, adding that they made a string of arrests in streets surrounding the square.

The Muslim Brotherhood has also called for a "million man" demonstration on Tuesday, to coincide with a huge demonstration organised by Morsi opponents.

The Brotherhood's Freedom and Justice Party says Thursday's decree was a necessary move to prevent the courts from disbanding the Islamist-dominated panel drawing up the new constitution.

The judges have hit back, denouncing "an unprecedented attack on the independence of the judiciary and its rulings," and calling for the courts to stop work nationwide.

Judges in two of the country's 27 provinces, including Mediterranean metropolis Alexandria, heeded the strike call on Sunday while those in the rest were meeting to decide their response, the Judges Club said.