The melting of polar ice caps raised sea levels by nearly half an inch (11 millimeters) over the last two decades, scientists said Thursday, calling it the most definitive measure yet of the impact of climate change. 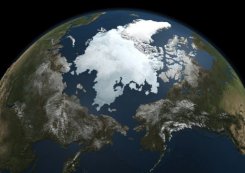 Picture taken by NASA's Aqua satellite shows the Arctic sea ice in 2010. The melting of polar ice caps raised sea levels by nearly half an inch (11 millimeters) over the last two decades, scientists said Thursday, calling it the most definitive measure yet of the impact of climate change.

There have been more than 30 previous estimates of whether and how much the ice caps are shrinking. But the numbers were often vague, with wide ranges, and different studies sometimes contradicted each other, the researchers said.

The new study, out Friday in the US journal "Science," combines data from ten different satellites since 1992, carefully matching up time periods and geographical locations so as to make a more accurate and wider-ranging assessment.

"Changes in the mass of ice stored within the polar ice sheets are important because they're a measure of changes in global climate and they directly affect global sea levels," said lead researcher Andrew Shepherd from the University of Leeds, in England.

Using the combined data, the international team of 47 scientists was able to determine that Antarctica and Greenland have contributed to just over 11 millimeters of sea level rise since 1992, or a fifth of the total.

"Crucially this improved certainty allows us to say that both have been losing ice," Shepherd told reporters during a telephone conference call on Wednesday.

Indeed, according to their analysis, Greenland is losing ice faster than before, added co-author Erik Ivins of NASA's Jet Propulsion Laboratory.

"If we compare data from the 1990s to those over the last decade, it would appear as though Greenland is losing mass at about five times the rate today as it was in the early 1990s," he explained.

Additionally, the new analysis showed that ice in Antarctica is shrinking overall, but more slowly than some reports have suggested.

"West Antarctica is losing quite a bit of mass," Ivins explained, though he noted that there is some compensation going on by gain in east Antarctica.

The researchers called their study a snapshot of the past twenty years, saying it can serve to increase understanding of what has already happened but does not provide predictions of what is yet to come.

Co-researcher Ian Joughin added that "the study demonstrates we need to not just make snapshots but sustained measurements, through a coordinated effort," over the next 20 years.

A separate study Wednesday reported that sea levels are rising 60 percent faster than the UN's climate panel forecast in its most recent assessment.

A trio of specialists reported in the journal "Environmental Research Letters" that sea levels are increasing at an average of 3.2 millimeters (0.125 inch) per year, compared to the 2 mm (0.078 inch) predicted by the UN's Intergovernmental Panel on Climate Change.

In addition to the melting of polar ice caps, sea levels are rising because warmer temperatures causes water to expand.