South Korean pop sensation Psy was the big winner at the Mnet Asian Music Awards in Hong Kong Friday, with thousands of fans a screaming testament to the spread of K-pop and "Gangnam Style". 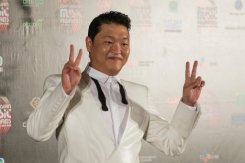 South Korean K-pop star Psy gestures during a press conference of the 2012 Mnet Asian Music Awards in Hong Kong. South Korean pop sensation Psy was the big winner at the awards, with thousands of fans a screaming testament to the spread of K-pop and "Gangnam Style".

The 34-year-old, wearing a white suit and baggy checkered pants, not only performed his infectious tune at the Korean music awards show, he also picked up gongs for song of the year, best music video, best dance performance and global favourite artist.

Psy, helped by his unorthodox horse-riding dance, is also riding the crest of a K-pop wave that has seen Korean music's popularity spread around Asia.

"They all have good looks, they can sing, they can dance... the whole package is too good for us," 19-year-old local high school student Kusum Nembang said as she waited to catch a glimpse of her idols near the red carpet.

"Even though Psy is not that handsome, even though he doesn't have the whole package, he's got brains and catchy dance moves."

Psy, whose full name is Park Jae-sang, made his debut in South Korea in 2001 but it was only 11 years later that he shot to global fame with "Gangnam Style", which has a record 850 million views on YouTube.

"I cannot break this record forever I think, unless I do naked video or something," Psy joked at a press conference after the awards ceremony.

The video, which parodies the extravagant lifestyles of residents of an upmarket Seoul neighbourhood, has inspired thousands of online imitations, and flash mobs of tens of thousands in Paris, Rome and Milan.

World figures including UN secretary general Ban Ki-moon, British Prime Minister David Cameron and US President Barack Obama have either tried out the dance or marvelled at its popularity.

"I appreciate each and everyone all around the world. Thank you for supporting Gangnam Style," the singer and rapper said after receiving one of his awards on stage, adding that he was "really proud and happy" the song was so famous.

As well as music, Korean cinema and television dramas have also been increasing in popularity around Asia, a phenomenon known as "Hallyu", or the Korean cultural wave.

But despite the popularity of K-pop in Japan, the country's widely-watched year-end TV show will feature only Japanese acts this year, with South Korean performers dropped from the line-up amid territorial frictions with Seoul.