Rescuers struggled to clear roads of debris in a bid to reach areas ravaged by Typhoon Bopha in the Philippines Wednesday, as authorities said the toll could go higher than the initial 52 reported deaths. 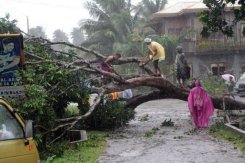 Workers cut up a fallen tree to clear a road after Typhoon Bopha hit the city of Tagum, Davao del Norter province, on the southern island of Mindanao. A typhoon slammed into the southern Philippines Tuesday, setting off a mudslide that killed 44 people, tearing up trees, causing floods and forcing thousands to flee their homes to emergency shelters.

After toppling trees, triggering deadly flash floods and mudslides and blowing away homes Tuesday, the typhoon had weakened overnight as it prepared to blow off into the South China Sea, forecasters said.

It was, however, still expected to dump rain as it passes over the western island of Palawan on Wednesday morning, potentially bringing more destruction, officials said.

He said the first military responders reached the mountain town of New Bataan late Monday, over 15 hours after Bopha made landfall on the eastern coast of the island.

"We have two companies setting off this morning to help in the search and rescue operations, but our military is also a victim of the storm," he said over radio station DZBB in Manila.

"In one of our headquarters, no bunkers were left standing and all our communication equipment had been destroyed."

He said an army patrol base and a rescue truck in New Bataan had been washed away by flash floods.

Forty-four people were killed when rainwater gushed down from nearby slopes, creating a deadly cocktail of mud, logs and rocks that crushed everything in its path.

The small mountain pass leading to the town had been littered with fallen trees and rocks, virtually cutting it off from road traffic.

"We are hoping to fly our helicopters to conduct reconnaissance and search and recovery," Bernardo added.

Eight others were confirmed killed elsewhere, although he said the toll could still rise with reports from the field indicating more than 50 others had died in the nearby province of Davao Oriental.

It was the sixteenth storm this year to ravage the Philippines, which gets about 20 cyclones annually.