Russia insisted on Friday its stand on the conflict in key ally Syria was unchanged, while Washington and Berlin prepared to deploy Patriot missiles and troops near Turkey's border with the country. 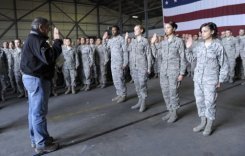 A young Syrian boy wearing a scarf bearing the colours of the pre-Baath Syrian flag looks on in the northern town of Darkush on December 14, 2012. Russia insisted its stand on the conflict in key ally Syria was unchanged, while Washington and Berlin prepared to deploy Patriot missiles and troops near Turkey's border with the country.

Germany and The Netherlands also have agreed to provide advanced "hit-to-kill" Patriot weapons, which are designed to knock out cruise and ballistic missiles as well as aircraft.

On Friday, the German parliament approved sending the missiles along with up to 400 US soldiers. Last week, the Dutch cabinet also gave a go-ahead for Patriots, along with a maximum 360 soldiers to operate them.

Bogdanov's comments, reported by several Russian news agencies, had appeared to mark a major change in policy by Moscow, which has repeatedly used its veto powers in the UN Security Council to shield its Cold War ally.

But foreign ministry spokesman Alexander Lukashevich insisted on Friday that there was no such shift. "We have never changed our position and we never will," he said.

At the close of a two-day European Union summit, British Prime Minister David Cameron said "inaction and indifference are not options" in Syria.

The situation in Syria, with more than 43,000 now dead since March 2011, is "truly dreadful and getting worse," he said, adding that there is "no single, simple answer."

Earlier, French President Francois Hollande said "the war is now turning against Assad and we should set ourselves this objective -- make Assad leave as quickly as possible."

A joint statement by EU leaders said they were "appalled by the increasingly deteriorating situation in Syria" and looking at "all options" to help the opposition and protect civilians.

As rebels have seized large swathes of northern Syria along Turkey's southern flanks, there has been mounting stray fire across the frontier. Some of it has been deadly, drawing strong warnings from Ankara that it will act to defend its territory.

Western governments resisted a Turkish call earlier this year for a Libyan-style no-fly zone to create a buffer zone at the border, a position reiterated by NATO on Friday.

"The deployment will be defensive only. It will not support a no-fly zone or any offensive operation," said alliance spokeswoman Oana Lungescu.

The Patriot, or "Phased Array Tracking Radar to Intercept on Target," came into its own during the 1991 Gulf War when it was deployed to protect allies and US forces from Iraqi Scud missiles.

US Defence Secretary Leon Panetta said on a visit to an airbase in southeast Turkey that his biggest concern was that Assad's regime might resort to chemical weapons in desperation.

"You can't imagine anyone who would do that to their own people. But history is replete with those leaders who made those kind of decisions, terrible decisions," he said. "So we have to be ready."

On the ground, Syrian troops bombed southern districts of Damascus on Friday while rebels and soldiers battled around two military schools in the north of the country, the Syrian Observatory for Human Rights said.

Nine rebels and eight soldiers were killed in heavy clashes near the School of Administrative Affairs, a military academy between Aleppo city and the town of Saraqeb to the southwest, said the monitoring group.

And thousands of Syrians took to the streets, criticising Washington for blacklisting a rebel jihadist group. "There is no terrorism in Syria except that of Assad," they chanted, as seen in videos posted on the Internet.

Nationwide at least 48 people were killed on Friday, including 24 rebels, the Britain-based Observatory reported.