An assassin slit the throat of Egypt's last great pharaoh at the climax of a bitter succession battle, scientists said in a report on a 3,000-year-old royal murder. 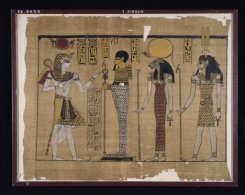 A papyrus representation of the reign of Egypt's last great pharaoh, Ramses III, is pictured in Venice on September 7, 2002. An assassin slit the pharaoh's throat at the climax of a bitter succession battle, scientists said Monday in a report on a 3,000-year-old royal murder.

Forensic technology suggests Ramses III, a king revered as a god, met his death at the hand of a killer, or killers, sent by his conniving wife and ambitious son, they said.

And a cadaver known as the "Screaming Mummy" could be that of the son himself, possibly forced to commit suicide after the plot, they added.

Computed tomography (CT) imaging of the mummy of Ramses III shows that the pharaoh's windpipe and major arteries were slashed, inflicting a wound 70 millimetres (2.75 inches) wide and reaching almost to the spine, the investigators said.

The cut severed all the soft tissue on the front of the neck.

"I have almost no doubt about the fact that Ramses III was killed by this cut in his throat," palaeopathologist Albert Zink of the EURAC Institute for Mummies and the Iceman in Italy told AFP.

"The cut is so very deep and quite large, it really goes down almost down to the bone (spine) -- it must have been a lethal injury."

Ramses III, who ruled from about 1188 to 1155 BC, is described in ancient documents as the "Great God" and a military leader who defended Egypt, then the richest prize in the Mediterranean, from repeated invasion.

He was about 65 when he died, but the cause of his death has never been clear.

Sketchy evidence lies in the Judicial Papyrus of Turin, which recorded four trials held for alleged conspirators in the king's death, among them one of his junior wives, Tiy, and her son Prince Pentawere.

In a year-long appraisal of the mummy, Zink and experts from Egypt, Italy and Germany found that the wound on Ramses III's neck had been hidden by mummified bandages.

"This was a big mystery that remained, what really happened to the king," said Zink of the study, published by the British Medical Journal (BMJ).

"We were very surprised and happy because we did not really expect to find something. Other people had inspected the mummy, at least from outside, and it was always described (as) 'there are no signs of any trauma or any injuries.'"

It is possible that Ramses's throat was cut after death, but this is highly unlikely as such a practice was never recorded as an ancient Egyptian embalming technique, the researchers said.

In addition, an amulet believed to contain magical healing powers was found in the cut.

"For me it is quite obvious that they inserted the amulet to let him heal for the after-life," said Zink.

"For the ancient Egyptians it was very important to have an almost complete body for the after-life," and embalmers often replaced body parts with sticks and other materials, he said.

The authors of the study also examined the mummy of an unknown man between the ages of 18 and 20 found with Ramses III in the royal burial chamber.

They found genetic evidence that the corpse, known as the Screaming Mummy for its open mouth and contorted face, was related to Ramses and may very well have been Prince Pentawere.

"He had a very strange, reddish colour and a very strange smell. And he was also covered with a goat skin and this is something that was considered as impure in ancient Egyptian times" -- possibly a post-mortem punishment.

If it was Pentawere, it appears he may have been forced to hang himself, a punishment deemed at the time as sufficient to purge one's sins for the after-life, the researchers said.

History shows, though, that the plotters failed to derail the line of succession. Ramses was succeeded by his chosen heir, his son Amonhirkhopshef.

Tourism businesses have been knocked comatose by the virus panic, while the Tourism Authority of Thailand cut its estimate for international arrivals this year.

Hong Kongers can expect to test ride electric minibuses and cross-harbour ferries in 2023 as HK$430 million (1.75 billion baht) has been allocated to develop green-energy transport in the budget announced on Wednesday.