A huge slab of sea floor near the Great Barrier Reef is in the early stages of collapse and could generate a tsunami when it finally breaks off, researchers warned Friday. 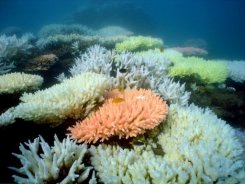 A photo received from Australian Institute of Marine Science on October 2, 2012 shows Australia's Great Barrier Reef. A huge slab of sea floor near the Great Barrier Reef is in the early stages of collapse and could generate a tsunami when it finally breaks off, researchers warned.

Marine geologists from Australia's James Cook University have been using advanced 3D mapping techniques on the deepest parts of the reef -- below diving depth -- since 2007 and have discovered dozens of sub-marine canyons.

On a recent trip, they came across the one cubic kilometre slab of sea floor, the remains of an ancient underwater landslide, which is perched on the continental shelf.

"Undersea landslides are a well understood geological process but we didn't know there were any on the Barrier Reef," geologist Robin Beaman told AFP.

"We found this one large block that stood out. It is sitting on top of a sub-marine canyon, cutting into the slopes and it is in the preliminary stage of collapse."

He stressed that no one knew when a collapse may occur, "whether tomorrow or even in our lifetime", but that people should be aware that it was there.

"It is slowly giving way although it remains stable under current conditions," he said.

"But it is absolutely going to collapse and when it does fall it will fall one kilometre into the adjacent basin.

"This will generate a localised tsunami that will affect the Queensland coastline, which is around 70 kilometres (40 miles) away.

"We're not trying to alarm people, but we need to know it is there and what could happen when it falls," he added.

The geologists who made the discovery, which was published in the journal Natural Hazards, were travelling on the Southern Surveyor, an Australian maritime research vessel.

This is the same ship on which scientist Maria Seton last month discovered that a South Pacific landmass identified on Google Earth and world maps as Sandy Island does not exist.