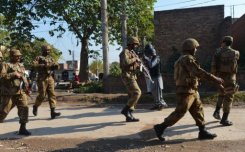 The attackers armed with heavy weapons including mortars and rocket launchers struck before dawn at the two militia posts outside Peshawar, the main city of northwest Pakistan, close to the restive tribal areas that border Afghanistan.

"The exchange of gunfire lasted about one hour in which they killed two soldiers, wounded one and took away 22 others," local administration official Naveed Akbar told AFP.

He said security forces had barricaded some roads and launched search operations in certain areas but no success had been reported so far.

A security official confirmed 22 members of the tribal militia were missing from the camps, which lie in a mountainous area about three kilometres (two miles) apart.

The camps are close to Pakistan's tribal areas, which are regarded as havens for Taliban and Al-Qaeda linked militants.

There was no immediate claim of responsibility for the attacks.

In August, the Pakistani Taliban released a video showing what appeared to be the severed heads of a dozen soldiers, after the military said 15 troops had gone missing following fighting with militants in the Bajaur tribal district.

There has been a surge in attacks in northwest Pakistan in the past two weeks, including a suicide bombing on a political meeting in Peshawar on Saturday that killed Bashir Bilour, the second top politician in Khyber Pakhtunkhwa province.

The Pakistani Taliban claimed responsibility for that attack, saying Bilour, an outspoken critic of the militants, was assassinated in revenge for the death of one of the movement's "elders".

Pakistan has lost more than 3,000 soldiers in the fight against homegrown insurgents but has resisted US pressure to do more to eliminate havens used by those fighting the Americans in Afghanistan.