The majority of Japanese towns and cities hosting nuclear plants said they would agree to the reactors being restarted if the government guaranteed the safety of the facilities, a survey said Sunday. 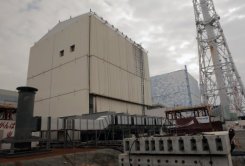 Reactor buildings at the Fukushima Dai-ichi nuclear power plant are pictured on December 29, 2012. Most Japanese cities hosting nuclear plants said they would agree to the reactors being restarted if the government guaranteed the safety of the facilities, a survey said Sunday.

All but two of Japan's 50 reactors remain closed for safety checks following the Fukushima nuclear disaster triggered by the March 2011 quake-tsunami and must get the blessing of a new regulator before being restarted.

Despite the Fukushima crisis, 54 percent of the 135 mayors of communities located near nuclear plants said they would accept the restart of the reactors, according to the survey by the Yomiuri Shimbun newspaper.

Only 18 percent said they would not support reactor restarts, while 28 percent refrained from clarifying their position, the Yomiuri said, while two did not give valid answers.

The results run contrary to public opposition to reactor restarts, as the Fukushima nuclear meltdown has fuelled fear of nuclear power in Japan.

The survey outcome however reflects the harsh economic reality in the rural communities hosting nuclear facilities, which are usually major employers in the areas that often have no other industries, the Yomiuri said.

Fukushima's crippled reactors went through meltdowns and explosions that sent radioactive materials in the surrounding areas, which is likely to be unfit for human activities for decades.

While tens of thousands of local residents remain evacuated from their homes, the government and plant operator Tokyo Electric Power Company expect to spend more than 30 years decommissioning the Fukushima reactors.

But the Yomiuri survey results may help Prime Minister Shinzo Abe, who came to power after his Liberal Democratic Party won a landslide victory in December elections.

Abe has voiced his support for nuclear energy and promised an agenda to rebuild the nation's sluggish economy.

Critics have said his LDP was partly responsible for the extent of the Fukushima catastrophe because of a culture of complicity during its more than five-decade rule.

It would also be a sharp policy reversal from the previous government led by Yoshihiko Noda, who pledged to gradually end nuclear energy in three decades, in line with public opinion and worries about nuclear energy expressed repeatedly in surveys.

The majority of the public have called for the end of or a significant reduction in nuclear plants.