Australian star Shane Warne admitted on Monday he went too far after being banned for one match and fined Aus$4,500 (US$4,700) for an ugly, foul-mouthed clash with West Indian Marlon Samuels. 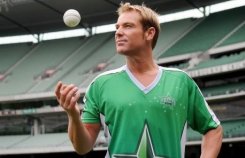 Australian cricketer Shane Warne in Melbourne on November 8, 2011. Warne was banned for one match and fined Aus$4,500 Monday after an ugly, foul-mouthed clash with West Indian Marlon Samuels during a Twenty20 match in Melbourne.

The spin legend, captaining the Melbourne Stars against city rivals the Renegades in the domestic Big Bash tournament on Sunday, was furious that Samuels pulled back David Hussey when the batsman was turning for a second run.

And when Samuels was batting later in the game, Warne confronted the West Indian by swearing at him.

In the next over Warne, in the field, threw the ball at the Jamaican's chest and Samuels reacted by tossing his bat down the pitch towards the Australian.

The two players squared up and had to be separated by the umpires.

Samuels was later forced to retire hurt when he top-edged a Lasith Malinga delivery into his eye. With blood gushing from his face, he needed hospital treatment.

Cricket Australia on Monday charged both players with multiple breaches of its code of behaviour and in Warne's case found him guilty of three of four offences.

The veteran leg-spinner was sanctioned for dissent at an umpire's decision, using obscene language and deliberate physical contact.

But he was cleared of another charge of throwing the ball at or near the West Indian in an "inappropriate and/or dangerous manner".

Samuels faces two breaches -- deliberate physical contact and unbecoming behaviour -- but it is not clear when the charges will be heard as he is nursing a suspected serious eye injury.

Stars' batsman Cameron White was also charged with dissent and received a suspended Aus$1,000 fine. The Renegades won the game by nine wickets in front of a record Australian domestic Twenty20 crowd of 46,581.

Warne, who cannot play in his team's Tuesday night clash against Sydney Thunder in Melbourne, initially claimed he had been harshly treated.

"I'm disappointed in some of my actions last night. Also I'm pretty disappointed with the severity of the penalties too," he said after the hearing.

"I think that was pretty harsh."

But he later backed down, saying his behaviour overstepped the mark.

"I have decided to accept my penalty of a one-match ban. Let's hope the boys can win tomorrow and we can make the semi-finals," Warne tweeted.

"Thanks for support guys, sport can be emotional and at times very passionate too. I went to far in trying to stand up for the team."

Model prisoners may be tagged, released from crowded jails

Model prisoners may be fitted with electronic tags and released on probation, to help relieve congestion in prisons, Justice Minister Somsak Thepsutin said on Friday.

HONG KONG: PTT Plc, Thailand’s largest energy company, raised US$700 million from the sale of a 50-year bond in Asia's longest dollar corporate debt deal, and bankers believe the shift towards longer-dated tenors in the region will continue.