Syria's tolerated opposition on Monday rejected an offer to enter into talks with the government of President Bashar al-Assad to find a solution to end the 21-month conflict. 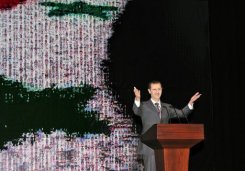 A Syrian Arab News Agency picture shows a pro-Assad demonstration in Homs on Sunday. Syria's tolerated opposition on Monday rejected an offer to enter into talks with the government of President Bashar al-Assad to find a solution to end the 21-month conflict.

The National Coordination Body for Democratic Change in Syria (NCB) issued its verdict even as Prime Minister Wael al-Halaqi said his cabinet would meet soon to draw up a mechanism for the peace roadmap announced on Sunday by Assad.

On Sunday, Assad outlined in his first speech in seven months his vision for a way out of the deadly conflict, calling for an end to the violence and a dialogue with opposition figures he deemed acceptable to chart a future course.

"We will not take part in a national dialogue before violence stops," the head of the opposition group, Hassan Abdel Azim, told a news conference in Damascus, setting the first of several conditions for talks with the regime.

He also demanded that any dialogue be preceded by the release of prisoners, a guarantee to ensure humanitarian aid is delivered to areas hit by the violence and the publication of a statement on the fate of missing Syrians.

"Any negotiation -- not just a national dialogue -- must be held under the aegis of the UN-Arab League envoy (Lakhdar Brahimi)," he said.

"There won't be direct negotiations or dialogue with the regime," he stressed.

Abdel Azim and fellow NCB member Raja al-Nasser insisted that time had run out for "political solutions" in a country where 21 months of violence have killed more than 60,000 people, according to the latest UN estimates.

"Assad had to make such proposals at the start of the conflict, in April or May 2011, but he refused and opted for the security solution," Abdel Aziz said.

Nasser branded the initiative revealed on Sunday by Assad as a "war speech."

The official SANA news agency quoted Assad's embattled prime minister as inviting government ministers to meet "in order to set up the necessary mechanisms for the national programme" outlined by the president.

On Sunday Assad outlined a three-phase plan, including entrusting the government with chairing a national dialogue conference with Syrians inside and outside the country to find a solution to the 21-month conflict.

The aim of the conference, he said, would be to draft a national charter in a bid to "pave the way for the political future of Syria", which would be later put to a national referendum for approval.

This would be followed by parliamentary elections and later the formation of a new government. But Assad, whose departure is demanded by the armed opposition, did not mention a new presidential election.

A statement by the NCB said Assad's initiative was "unrealistic and unachievable."

The NCB, which was set up in September 2011, six months after the outbreak of the Syrian conflict, brings together Arab and Kurdish nationalists, Marxists and independents, such as writer Michel Kilo and economist Aref Dalila.

The group rejects the idea of foreign military intervention in Syria.

US Supreme Court strikes down constitutional right to abortion