At least 14 Pakistani soldiers were killed and 25 others injured Sunday when a roadside bomb hit a military convoy in a lawless tribal area bordering Afghanistan, officials said. 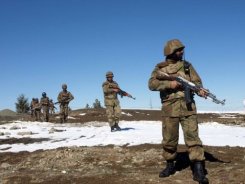 Pakistani soldiers on patrol near the North Waziristan town of Pash Ziarat on March 8, 2011. A roadside bomb has killed at least 14 Pakistani soldiers and injured 25 others in a lawless tribal area bordering Afghanistan, officials say.

"At least 14 soldiers embraced martyrdom and 25 others were wounded in an IED (attack)," he said about the bombing which was confirmed by local security officials.

All the soldiers killed were in one truck and those injured were in vehicles behind it, he added.

The seven northwestern tribal districts are rife with homegrown insurgents as well as Taliban and Al-Qaeda-linked operatives.

The Al-Qaeda-linked Haqqani network in North Waziristan, blamed for some of the deadliest attacks in Afghanistan, is one of the thorniest issues in relations between Islamabad and Washington.

Washington has long demanded that Pakistan take action against the Haqqanis described by a former US general as a "veritable arm" of the Pakistani intelligence service.

Pakistan says it will act according to its own needs and priorities and not on the wishes of a foreign government.

Islamabad says more than 35,000 people have been killed as a result of terrorism in the country since the 9/11 attacks on the United States.

A mini-Russia gets squeezed by war