Birth control law too late for Philippine mum of 22
World

Birth control law too late for Philippine mum of 22

A historic birth control law that has taken effect in the Philippines after years of opposition from the Catholic Church came too late for Rosalie Cabenan, a housewife who has given birth 22 times. 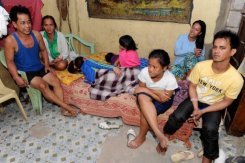 Rosalie Cabenan (2nd L) with her husband Danilo and some of their children at their home in a massive slum in Manila on January 16, 2013. A historic birth control law that took effect in the Philippines after years of opposition from the Catholic Church came too late for Cabenan, a housewife who has given birth 22 times.

Frail, with a leathery face streaked with wrinkles, the 48-year-old Cabenan suffers from untreated gall stones and constant fatigue because her body has never had the time to properly recover from her successive pregnancies.

"We only wanted three children. But they kept coming and coming," Cabenan told AFP this week at her ramshackle home in Baseco, a massive slum in Manila where more than 60,000 people compete for space.

"I was always pregnant and there was no time to take care of myself because I had to keep working to help my husband feed the children. I have tried everything, a stevedore (dock worker), a laundry woman, fish monger and a vegetable seller."

Cabenan had her first child when she was 14. When she nearly died giving birth to her youngest, who is now six, she abandoned the demands of the Catholic Church to not use contraceptives.

A devout Catholic who still goes to mass twice a week, Cabenan nevertheless regrets following the church dogma so strictly and said she welcomed the Responsible Parenthood Law that officially took effect on Thursday.

"I tell women now, please do not be like me. I have too many children, and sometimes I do not know what to do and just cry, especially when they fight," she said.

The law requires government health centres to hand out free condoms and birth control pills, benefiting tens of millions of the country's poor who would not otherwise be able to afford or have access to them.

It also mandates that sex education be taught in schools and public health workers receive family planning training, while post-abortion medical care has been made legal for the first time.

"This is a triumph for poor women and girls who would otherwise have no access to these things," the United Nations Population Fund's country representative, Ugochi Daniels, told AFP.

While the plight of Cabenan is extreme, it is common in the Philippines to see very large families, particularly among the poor masses. One of Cabenan's neighbours has given birth to 16 children.

The Philippines has one of the highest birth rates in the world -- 3.1 for every woman -- and the highest teenage pregnancy rate in the Asia-Pacific, according to the medical charity group Merlin.

The Catholic Church, which counts 80 percent of the country's 100 million people as its followers, had for more than a decade successfully lobbied and intimidated politicians into blocking pro-birth control acts in parliament.

However President Benigno Aquino, a bachelor who is one of the most popular leaders in the country's history, used his political capital to defy the church and help steer the Reproductive Health Act through parliament last year.

The church has continued to resist, warning pro-life politicians they will be targeted in mid-term elections this year and backing various groups' legal challenges to the law.

Asked to comment on the plight of Cabenan, one of the groups that filed a petition with Supreme Court to strike down the law said her 22 children should be a cause for celebration and not regret.

"Children are never a liability. In fact, in the provinces, the more children you have, the more it is considered a gift," Serve Life spokesman Anthony Lanicao told AFP.

He also said couples with so many unwanted children were "partly at fault" because they should have checked their sexual urges.

For Cabenan, however, church leaders are partly to blame.

"They tell you to go forth and multiply, but now when you ask for help, they just pass you by," she said.

She said nobody taught her proper family planning methods and there was no easy access to free contraceptives in Baseco.

Cabenan met her husband, Danilo, when she was in high school, and he, a struggling teenage docker in Manila's tough port area.

She soon dropped out of school to be with Danilo, now 50, in a union that quickly resulted in successive births that dashed her ambition of one day becoming a teacher.

"It is very difficult to have many children... many times we sleep without eating," she said.

Cabenan also mixes up her children's names and birthdays.

But she said the most difficult and painful part was failing to provide basic medical care to her children.

Of the 22, five died young due to diarrhea, a treatable disease that constantly plagues the slums, because they had no money to buy medicines or take them to hospital.

Six of the surviving 17 children are males, while the rest are females.

Six of the eldest are either married or have children out of wedlock -- and nearly all of them squeeze in a house cobbled together from bricks, drift wood and tarpaulin that is the size of a small garage.

Cabenan said most of her children were delivered at home by midwives, although one was born on a bus and another by a roadside with the help of passers by.

Her husband has no permanent job and finds construction work anywhere he can. Only three of the children are studying. None of the older ones were able to finish high school.

"If we had this law in the past, maybe we would have had a better life today," she said.

At least 20 escape Syria prison holding IS inmates after quake