After harassment and prison failed to silence Vietnam's dissident bloggers, the communist government started building an army of propaganda agents to infiltrate chatrooms and sing the regime's praises. 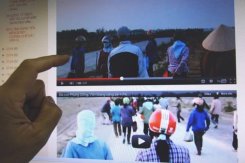 A man watches a video posted on a popular Vietnamese blog on May 7, 2012 in Hanoi. After harassment and prison failed to silence Vietnam's dissident bloggers, the communist government started building an army of propaganda agents to infiltrate chatrooms and sing the regime's praises.

"Their favourite arguments are: 'shut up and trust the government'. They don't engage in rational debate. They go in for personal attacks and spreading poisonous fallacies," said one Hanoi-based pro-democracy blogger.

"If I write anything that attracts attention, they will jump in to 'guide the public'," she told AFP on condition of anonymity.

Hanoi's head of propaganda Ho Quang Loi said last week that the city has a 900-strong team of "internet polemicists" or "public opinion shapers" who are tasked with spreading the party line.

His comments were the first official admission that the communist regime employs a Chinese-style system of Internet moderators to control news and manipulate opinion.

The "teams of experts" have set up some 18 websites and 400 online accounts to monitor and direct online discussions on everything from foreign policy to land rights, Loi said.

A typical pro-government comment on one online forum read: "Don't listen to the anti-nation words of overseas reactionaries. They were hired by the former regime to spread propaganda and instigate social disorder."

If "previous generations had lost trust in the government as you have now, do you think you would sit here Facebooking?" another comment said, bemoaning the "ungrateful" younger generation.

Bloggers contacted by AFP said they could not estimate the scale of the government Internet commentator program or whether it was nationwide, but said it certainly appeared to have expanded over the last couple of years.

Loi was talking only about the Hanoi city authorities' use of Internet agents and did not make clear whether the 900 people were paid employees.

But a 26 December post on the official website of southern Ho Chi Minh City authorities mentions paying subsidies to "stringers for social opinion" -- another euphemism for pro-government Internet commentators.

"It's incredibly ironic that rights-repressing governments such as Vietnam forge groups of cyber troopers to get their pro-government message out," Human Rights Watch's Phil Robertson told AFP on Tuesday.

Yet they "see no contradiction in using harassment, censorship and firewalls to try and keep opposing opinions repressed," he added.

Vietnam, branded an "enemy of the Internet" by Reporters Without Borders, has jailed dozens of bloggers, including 15 activists since the start of 2013 alone.

Appeals by three high-profile bloggers, including one whose case has been raised by US President Barack Obama, were rejected in December.

Facebook is sporadically blocked and the communist regime's top leaders have repeatedly lashed out over online dissent.

"They let the genie out of the bottle. They promoted interconnectivity (and now) they're trying to suppress what can't be suppressed," said Vietnam expert Carl Thayer.

The bloggers agree the government's efforts, including their cyber troopers, are futile.

"They may think that they have been successful in orienting public opinions, but I think they are completely wrong. People are not stupid," a second Hanoi-based blogger told AFP on condition of anonymity.

Dissatisfaction with the government is widespread but decades of war and fighting have sapped people's desire for confrontation, she added.

"They don't want to get into trouble by expressing their opinions publicly now. But in their hearts, no one is happy."

Eleven sentenced to death in Tanzania over conservationist's murder