More than 140 countries agreed Saturday on a ground-breaking treaty to rein in the use and emission of health-hazardous mercury, the UN said, but environmental activists lamented it did not go far enough. 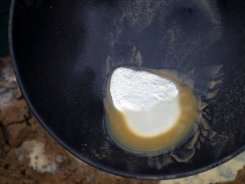 An amalgam of mercury and gold --the toxic metal is used to extract the gold particles from the silt -- in Delta Uno camp, department of Madre de Dios, southeast Lima, Peru, in the forest bordering with Brazil on November 16, 2009.

The world's first legally binding treaty on mercury was reached after a week of thorny talks and ends four years of heated discussions on how to cut global emission levels of the toxic heavy metal, which poses risks to human health and the environment.

"This was a herculean task .. but we have succeeded," Achim Steiner, UN under-secretary general and head of the UN Environment Programme (UNEP), told reporters in Geneva.

The treaty has been named the Minamata Convention on Mercury, in honour of the Japanese town where inhabitants for decades have suffered the consequences of serious mercury contamination.

It will be signed in Minamata in October and will take effect once ratified by 50 countries -- something organisers expect will take three to four years.

"It is quite remarkable how much mercury in a sense has entered into use in our lives... We've been creating a terrible legacy," Steiner said.

"Mercury accumulates in the food chain through fish... It is released through coal fired power stations and it travels sometimes thousands of kilometres. It affects the Inuit in Canada just as it affects the small-scale artisanal gold miner somewhere in southern Africa," he said.

Serious mercury poisoning affects the body's immune system and development of the brain and nervous system, posing the greatest risk to foetuses and infants.

The treaty sets a phase-out date of 2020 for a long line of products including mercury thermometers, blood pressure measuring devices, most batteries, switches, some kinds of fluorescent lamps and soaps and cosmetics.

It makes exceptions, however, for some large medical measuring devices where no mercury-free alternatives exist.

In a controversial move, it also excluded vaccines that use mercury as a preservative.

The risk from these vaccines is considered low and for many developing nations, removing them would entail losing access to vaccines altogether, Tim Kasten, head of UNEP's chemicals division explained.

Amid pressure from dentist groups, the treaty also did not provide a cut-off date for the use of dental fillings using mercury amalgam, but did agree that the product should be phased down.

The text gives governments 15 years to end all mercury mining.

While welcoming the treaty, a number of non-governmental groups said they were disappointed it did not go further.

The text, many said, fell short in addressing the greatest sources of mercury in the environment: artisanal small-scale gold mining, which directly threatens the health of the some 10-15 million people working in this field and contaminates water and air, as well as emissions from coal-burning power plants.

"We're disappointed... The two biggest sources of mercury have only weak controls on them," Joe DiGangi, a science advisor with the IPEN advocacy group, told AFP.

For coal-fired power plants, the treaty calls only for control and reduction of mercury emissions "where feasible", which is "vague and very discretional," he said.

As for small gold mining activities, using mercury will still be allowed, meaning imports and exports of the metal for this process will be legal, and governments will only be required to control the activity if they deem it "more than insignificant -- whatever that means," DiGangi said.

"With the current text, it seems the mercury use in (small-scale gold mining) may go on indefinitely," he said in a statement.

Steiner acknowledged the criticism but stressed the treaty "is a dynamic instrument" and would evolve over time to address all concerns.

Switzerland and Norway, which initiated the process a decade ago, with Japan pledged an initial $3.0 million (2.2 million euros) to get things started.

Once up and running, the treaty will provide funds to ease the transition away from mercury through the UN's existing Global Environment Facility (GEF), and probably also a second mechanism, organisers said.

Blinken in Ukraine in show of support against Russia