Sixth Delhi gang-rape accused to be tried as juvenile
World

Sixth Delhi gang-rape accused to be tried as juvenile

A court on Monday ruled that the sixth suspect in last month's deadly gang-rape of a student on a bus in New Delhi would be tried as a juvenile, meaning he will face a maximum prison term of three years. 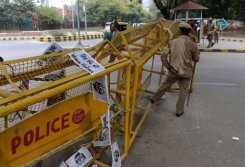 An Indian police officer looks at a string of anti-rape posters hung over a police barricade at Janatar Mantar in New Delhi on January 28, 2013. A court has ruled that the sixth suspect in last month's deadly gang-rape of a student on a bus in New Delhi would be tried as a juvenile, after rejecting calls for tests to determine his age.

He has been charged with rape but not with murder, which is a charge rarely levelled against minors even when a victim dies.

While the other five suspects face the possibility of being hanged if found guilty of rape and murder charges, the maximum sentence for the juvenile is three years in a young offenders' institute.

Subramanian Swamy, president of the centrist Janata Party, had filed a petition last week calling on judges to order ossification tests on the suspect to challenge his assertion that he was under the age of 18.

But Ishkaran Bhandari, a lawyer for the teenager who cannot be named for legal reasons, said the Delhi-based Juvenile Justice Board accepted the school records of the suspect, which states that he was born on June 4, 1995, making him 17.

"The court has gone as per the school record," Bhandari told reporters outside the court.

The 23-year-old gang-rape victim, a promising student whose father worked extra shifts as an airport baggage handler to educate her, suffered massive internal injuries during the assault on the bus in which she was raped and violated with an iron bar.

She died 13 days later after the government airlifted her to a Singapore hospital in a last-ditch bid to save her life.

The victims' parents had been among those calling for the juvenile to be tried alongside the five other accused.

"If someone can commit such a heinous crime then he cannot be considered a juvenile. He should be hanged," the mother told AFP in an interview last week.

US lawmakers to meet Taiwan president as China seethes