Starbucks opened its first store in coffee-loving Vietnam on Friday, seeking to compete with local rivals in a country known for its strong cafe culture. 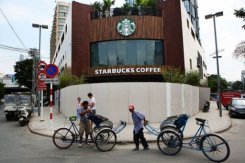 Cyclo drivers wait outside the Starbucks cafe in in Ho Chi Minh city, the first in Vietnam, on January 31, 2013 ahead of its official opening on February 1. Starbucks opened its first store in coffee-loving Vietnam on Friday, seeking to compete with local rivals in a country known for its strong cafe culture.

Vietnam -- the world's second-largest coffee producer -- has dozens of local chains as well as small coffee shops on nearly every street corner, presenting a major challenge for Starbucks to break into the crowded market.

Around 100 people queued up in southern Ho Chi Minh City for the opening, but the US giant's coffee was not to everybody's taste.

"I prefer Vietnamese coffee, which is stronger than Starbucks. As a Vietnamese, I love local coffee," said Nguyen Tien Tam, 35.

Vietnamese coffee is traditionally prepared in individual metal drip filters, producing a very strong, thick liquid that can be mixed with condensed milk or served black over ice.

Starbucks said in a statement that its store would "embrace distinctive Vietnam traditions and strong heritage of coffee passion".

"We have deep respect for Vietnam's long coffee traditions," it added.

An increasing number, however, are switching to arabica beans, which command higher prices, and Starbucks has said it aims to buy more of this type from local suppliers.

Starbucks has been targeting growth outside of the stagnant US market, opening thousands of stores in China and across the Asia-Pacific region over the past few years.