Deadly riots broke out in Bangladeshi cities on Tuesday after a court sentenced a senior Islamist opposition leader to life in prison for mass murder during the 1971 liberation war against Pakistan. 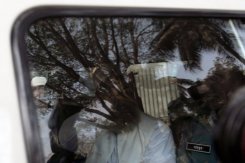 Abdul Quader Molla, 64, the fourth-highest-ranked leader of the Jamaat-e-Islami party, is seen through a car window heading to the central jail following his verdict in Dhaka on February 5, 2013. Riots broke out in several Bangladesh cities after a court sentenced him to life in prison for mass murder during the 1971 liberation war against Pakistan.

Abdul Quader Molla, 64, the fourth-highest leader of the Jamaat-e-Islami party, was the first politician to be found guilty by the International Crimes Tribunal, a much-criticised domestic court based in Dhaka.

Molla cried "Allahu Akbar!" (God is greater) and said the charges were false after presiding judge Obaidul Hassan delivered the verdict in a crowded and tightly guarded court.

"He deserved the death sentence because of the gravity of the crimes. But the court gave him life imprisonment," said Attorney General Mahbubey Alam, adding Molla was found guilty of five out of six charges including mass murder.

Two men were shot dead in clashes with police in the port city of Chittagong as the ruling sparked immediate protests by Jamaat, the nation's largest Islamic party, which enforced a countrywide strike in anticipation of the conviction.

A garment worker died after he was hit by a bus during the clashes, he said. Fifty people were also injured in the violence including six policemen who were allegedly shot by protesters, police officials said.

Police also clashed with protesters in the capital Dhaka and the northwestern city of Rajshahi, firing tear gas and rubber bullets to disperse demonstrators who smashed vehicles and hurled firebombs.

The verdict is the second by the tribunal. On January 21 a top TV preacher who is an ex-Jamaat official was sentenced to death in absentia for murder and genocide.

Ten other opposition figures -- including the entire leadership of Jamaat and two from the main opposition Bangladesh Nationalist Party (BNP) -- stand accused of war crimes.

Both Jamaat and BNP have labelled the cases "show trials" aimed at barring the leaders from upcoming polls. International rights groups have questioned the proceedings.

Prosecutors said during the war Molla was a senior figure in the then-student wing of Jamaat, while studying physics at Dhaka University, and was a member of a pro-Pakistan militia accused of killing hundreds of thousands of people.

"He directly participated in the killing of over 350 unarmed Bengali civilians including a poet and a top journalist," prosecutor Mohammad Ali told AFP, adding he was known as "Butcher of Mirpur", a Dhaka suburb.

"He killed my father and he got away. I am not happy," said Khandoker Abul Ahsan, son of Khandoker Abu Taleb, a well-known journalist killed during the 1971 war.

Security was tight in the capital with more than 10,000 police on patrol as war veterans and ruling party supporters held rival marches.

Schools were closed and many shops and businesses shuttered. Motorways linking Dhaka with other cities were largely empty.

Police said a young banker was burnt to death and four people injured in Dhaka on Monday night after a bus was torched by suspected Jamaat activists protesting against the war crime trials.

The tribunal, which has no international oversight, was created by the country's secular government in 2010. The opposition has alleged that it is politically motivated and is selective in its targets.

Defence lawyers said Molla, Jamaat's assistant secretary general, spent the entire time of the nine-month war in his village and alleged that the tribunal severely curtailed their ability to prove his innocence.

"We put forward the name of 965 defence witnesses. But the tribunal allowed only six," said Shazzad Chowdhury, adding that they would appeal the verdict.

Bangladesh, which was called East Pakistan until 1971, has struggled to come to terms with its violent birth.

The current government says up to three million people were killed in the war, but independent estimates put the figure far lower.