Cambodia on Wednesday unveiled a memorial to dozens of foreign and local journalists who died while covering the 1970-75 war that was won by the communist Khmer Rouge regime. 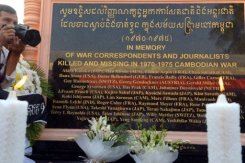 A Cambodian photographer takes a picture next to a memorial in Phnom Penh, on February 6, 2013. Cambodia has unveiled a memorial to dozens of foreign and local journalists who died while covering the 1970-75 war that was won by the communist Khmer Rouge regime.

At least 37 journalists were killed or disappeared during the brutal conflict between the US-backed Lon Nol government and Khmer Rouge guerrillas.

Their names are engraved on the memorial built in a public park in front of Phnom Penh's Le Royal Hotel, which was a meeting place for foreign correspondents in the 1970s.

"Their words, their images will remain with us forever," Chhang Song, a former information minister in the Lon Nol government, said at the ceremony.

Up to two million people were executed or died of starvation or overwork under the Khmer Rouge, after the hardline movement swept to power on April 17 1975 and emptied cities in an attempt to create a communist utopia.

The slain journalists included Agence France-Presse reporter Marc Filloux, who was killed in April 1974 along with his interpreter Manivanh after travelling to Cambodia to interview Khmer Rouge leaders.