Rebels on Tuesday overran a military air base and captured warplanes, gaining ground in northern Syria for a second straight day as the UN said the death toll from the 23-month conflict was nearly 70,000. 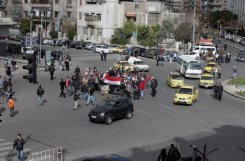 Supporters of the Syrian president wave national flags with his portaits in the streets of central Damascus in a small pro-regime rally on February 12, 2013. Rebels on Tuesday overran a military air base and captured warplanes, gaining ground in northern Syria for a second straight day as the UN said the death toll from the 23-month conflict was nearly 70,000.

The military advance came as prospects for a political solution to the war faded and as UN Secretary General Ban Ki-moon urged President Bashar al-Assad's regime to accept an opposition leader's dialogue offer.

The Syrian Observatory for Human Rights said the rebels captured a military airport at Al-Jarrah in Aleppo province, seizing for the first time a fleet of warplanes including MiG fighters.

During the assault, the rebels killed, injured or imprisoned dozens of troops, the watchdog said, adding withdrawing troops also left behind ammunition.

Soon afterwards, regime fighter jets pounded Al-Jarrah to try to dislodge the rebels, the Observatory said, adding there were raids near the international airport which has come under a rebel assault.

A military source in Aleppo confirmed the rebel capture "after 48 hours of fierce combat", but downplayed the importance of Al-Jarrah.

"It is a very small airport, used for training purposes," he said. "There are only small amounts of unusable ammunition left there, and several planes that have long been out of action."

But Colonel Abdel Jabbar al-Okaidi of the opposition Free Syrian Army insisted the rebels achieved a "major advance" in Aleppo province and said there would be "more surprises" soon.

Okaidi told AFP: "We achieved full control over Al-Jarrah airport... in addition to a series of checkpoints on the road between the airport and Aleppo city."

"As a result of these victories the situation is very difficult for regime forces at Aleppo international airport, Ming and Nayrab," he added.

Closed since January 1, "Aleppo's international airport has in the past suffered attacks, but tightened security measures and the Syrian army's bravery has stopped armed men from getting anywhere near there," said the army source.

The Observatory said rebels also captured the main road linking Aleppo province to Raqa and parts of a military base tasked with securing the area's airports.

The watchdog said 78 soldiers and 73 rebels were among 185 people killed nationwide on Tuesday.

Aleppo activists have told AFP that fighters in the north have shifted their focus from city battles to the capture of military airports and bases.

"They are important because they are an instant source of ammunition and supplies, and because their capture means putting out of action the warplanes used to bombard us," said one of them, Abu Hisham.

Though the rebels have yet to take a major city almost two years into the revolution, Tuesday's advances in the north were remarkably speedy, the Observatory's Rami Abdel Rahman said.

"After events in Aleppo on Tuesday, it became ever more clear that the regime's insistence on an imminent victory is false," he told AFP.

Assad meanwhile called for "collective action" to limit the effects of the crisis, while accusing groups of trying to destroy infrastructure, state news agency SANA said.

The conflict has killed nearly 70,000 people since it erupted in March 2011, UN rights chief Navi Pillay said, only a month after putting the toll at 60,000.

Pillay also condemned inaction at the UN Security Council, where China and Russia have blocked three resolutions that would have threatened sanctions against Damascus.

"We will be judged against the tragedy that has unfolded before our eyes. This council, as well of those of us in key positions within the UN, will be rightly asked what we did," she said.

Her comments after the UN's Ban urged Damascus to view an offer for talks with National Coalition chief Ahmed Moaz al-Khatib as "an opportunity we should not miss".

Ban also said the Security Council "must no longer stand on the sidelines, deadlocked, silently witnessing the slaughter".